2048 is a new viral game which is famous all over the Internet. This is a single user game which has been created by Gabriele Cirulli in March 2014. This is a very fun but addictive game. The interface of this game is simple a 4*4 grid where you have to slide the numbers in four direction either using Arrow keys or touch screen in case of smartphones. This is based on very simple principle of mathematics but, indeed this is one of the best game I came across.

What is the Mathematics behind 2048 Game

The Objective of this game is to complete 2048 in any of the block and you won the game, however if you wish you can move along to form any other big number. As each tile consists of 2 or a power of 2, a user has to match

matches to get a tile with

in the worst case scenario. Here as the objective is to form 2048 which is 11th power of 2, so if considered perfectly a player need to make 1023 matches ideally to win this game. However sometimes 4 too came in between, so in the real case you have to make less than 1023 matches.

I have read many users comments on this game and they found it a little bit difficult to solve as they got stuck at 1024 and they can’t surpass it as then all the blocks are filled and it says game is over. There is no undo option, so you have to be very careful about your moves. There are options of 2 undo in case of smartphones, however no undo options are provided on the normal website. Still providing 2 undo is not worth it as you won’t need it anyway if you make the proper strategy and play it thoughtfully. Let’s go on how to play this game.

At first open this game and move the numbers here and there to start this game. A screenshot of which is shown below: 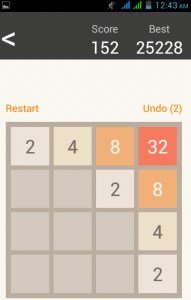 Now once you have started the game make sure that you put the biggest number on one end and try to full any row whether it be horizontal or vertical, it depends on you. Here, i have filled in both directions but i will keep the horizontal one fixed no matter what i have to do. If I don’t have any choice then I might consider moving my first row. As you have to fix the first row or column, you are left with only three direction to move along. Here, I have left, right and upper direction free and blocked using the lower direction. This i do just to make sure that number matches with each other in perfect way and i won’t need to worry about matching numbers in case I have paired numbers. 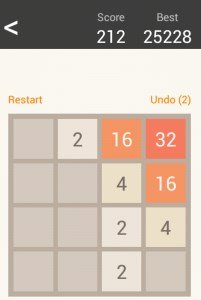 As here, I could also move down in lower direction but I won’t as then any random number could come up in the place of 32 or 16. So, I would rather wait here to full the above row by moving only upper and right move. Here, even moving the numbers left would create problems as then a new number might come here and it will imbalance your strategy. Keep on moving the cursor keeping in mind 4 things which are mentioned below:

This is what you will get while playing keeping in mind the above four tips. Moving in the right direction, you will get the below result. 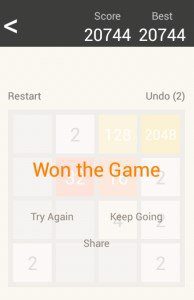 Once, you got this you can either keep going and play further to make bigger numbers or try again to form this number again and again. This also gives you sharing option on Facebook and give your friends a good target. I have played and reach to the below shown screenshot. 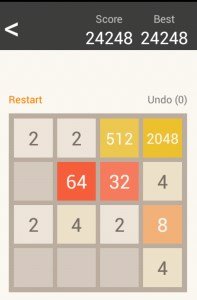 Reaching to this stage, i accidentally move in the lower direction and it disturbs my further journey. Try this out and make your best score. If you have any query do ask us in the comment box below.

Click here to get Android version.
You may like:
Age of Empires III – Play in More Enthusiastic Way