Microsoft comes out with another patch KB4457136 for Windows 10 v1709. This cumulative update contains a wide range of significant changes for the operating system. Many issues regarding Task Scheduler, Narrator, printing, and so on are fixed in this patch.

This cumulative update does not incorporate any features. If you have already installed the earlier updates, then only the new improvements in the package will be downloaded moreover installed. You can download KB4457136 using two different procedures. These are – manually via Windows Update and through Microsoft Update Catalog. 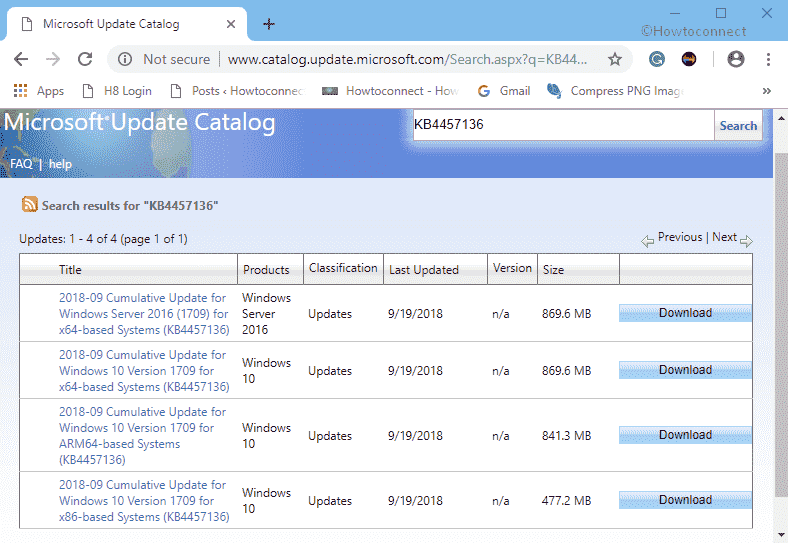 The Microsoft team focuses on the problem with the file previewer for .html, email (MIME) attachments, and .mht in Microsoft Outlook.

The release of KB4457136 deals with the trouble that leads Internet Explorer security moreover certificate dialogs to display prompts in the backgrounds instead of the foreground.

The team addresses the issue that leads downloads to WebDAV locations to fail.

When Mark of the Web (MOTW) is not compatible at the download location, the situation causes downloads to fail is resolved in this patch.

This cumulative update makes an attempt to bypass the problem where Microsoft Narrator was unable to access the contents of Windows Security dialogs. It is basically displayed by a low integrity level process.

In certain cases, an issue does not allow installation of encrypted .appx packages is fixed in KB4457136.

The solution to the problem that may lead the system to not respond when applications call the EnableEUDC API is out in this update.

When users enter Japanese characters in a remote desktop session (mstsc.exe), a problem occurs which is taken care of in this update.

Microsoft team comes with a solution for evaluating the compatibility status of the Windows ecosystem. This ensures application moreover device compatibility for all updates to Windows.

The solution for the issue with the diagnostic pipeline for devices enrolled in Windows Analytics when the CommercialID key is present in the following path.

When the Device Guard lockdown policy is turned on, a problem that stops the “App-V client’s” scheduled task from syncing is resolved with the release of this update.

When users use a smart card in order to log into a “Remote Desktop Server”, they come across an error “STATUS_LOGON_FAILURE”.

You will get a solution to the issue that occurs while using encrypted email. When first asked for the PIN, if you select Cancel, then multiple PIN prompts will continuously appear until it finally goes away.

When the TPM device stores the client authentication certificate, then a problem that makes a Direct Access connection to fail is resolved in this update.

Certain laptops face issues where they prevent the device from a complete sign-out. The trouble occurs when the user signs out and then immediately closes the laptop. Therefore, as a result, when they open the laptop at a later time, the device reboot automatically.

KB4457136 for Windows 10 1709 carries a solution for the problem that makes the system to log negative events for drives. It happens for the drives that are valid as well as trusted. When you run Windows Defender Application Control (Device Guard) in audit mode, this issue happens to appear.

The release of this cumulative update deals with the trouble that stops the Local Security Authority Subsystem Service (in short LSASS) from working. This occurs when an attempt is made to process a malformed security identifier (in short SID).

Microsoft and the team brings a solution to the problem when sometimes the logging on to a Remote Desktop Session Host Server stops responding.

Without displaying any error, the printing to an open or existing file fails is resolved in this patch. It occurs when you use “Microsoft Print to PDF” or “XPS Document Writer” only.

When the scheduled tasks fail to start at the time they are configured is fixed in this cumulative update.

The release of this patch addresses a trouble with a scheduled task that has an indefinite duration. Instead of starting at the specified time, the task starts immediately.

Deals with the trouble that stops the running of subsequent actions in a task. Users experience this problem when using Task Scheduler they create multiple actions in a task. Furthermore, when the task is scheduled under the Stop the existing instance rule.

KB4457136 for Windows 10 1709 fixes the issue of a task that has repetition settings. After disabling and re-enabling the task, it fails to work on the scheduled time. Though the Next Run Time in Task Scheduler shows the correct time but fails to start the task at the allotted time.

When one or more services are configured to run with domain credentials (service accounts), it stops the Netlogon and Service Control Manager (SCM). So, Microsoft deals with this issue in KB4457136.

Another similar issue of the Task Scheduler is fixed in this update. When the task is updated or created, the daily and the repetitive task starts unexpectedly.

The team focuses on the problem in which GetSystemTime() returns an invalid value after using SetSystemTime() immediately before.

While fixing many things, Microsoft also deals with the trouble that happens when using  X509HintsNeeded Group Policy to prepopulate the Username hint field. Once you logon successfully, the “Username hint” field goes blank in an unexpected way while you make an attempt to unlock the machine. Normally, the Username hint caching actually works for the lock and unlock scenarios only. It is not mentioned for logoff and logon scenarios.

After upgrading to Windows 10 v1709 from versions 1607 and 1703, a specific problem occurs that basically fails to maintain the tile layout.

Microsoft is not aware of any problems with this update.

Note – You must ensure to install the latest “servicing stack update” (SSU) for the OS before you make an attempt to install the “latest cumulative update” (LCU). This will eventually help you mitigate potential problems while installing the LCU.

To grab this stand-alone package, get access to any web browser and navigate to the Microsoft Update Catalog.

Depending on your PC’s architecture, download the one accordingly.

On the subsequent page, switch to the right pane of Windows Update.