KB4493440 is a new cumulative update unfolded out on April 25, 2019, for Windows 10. This patch comprises a collection of several fixes and improvements for Version 1709 keeping other features almost the same. Microsoft predominantly considered and focused the issues like – the Japanese era, CALDATETIME, IME and lots more in this update. In addition, this patch is introduced as quality improvement to take the operating system to Build 16299.1127. The update covers bug fixes and stability enhancement to make the OS more reliable.

Users are able to download KB4493440 as MSI file format from Microsoft update catalog website. Generally, you grab patches like this automatically through Windows update. However, the manual installation is an easier option when you fail to get the patch by itself. We suggest you upgrade your machine to the newest versions for having a better UI and to sustain security updates. If you prefer to see all the patches on a single platform then follow – Windows 10 Cumulative Updates List. 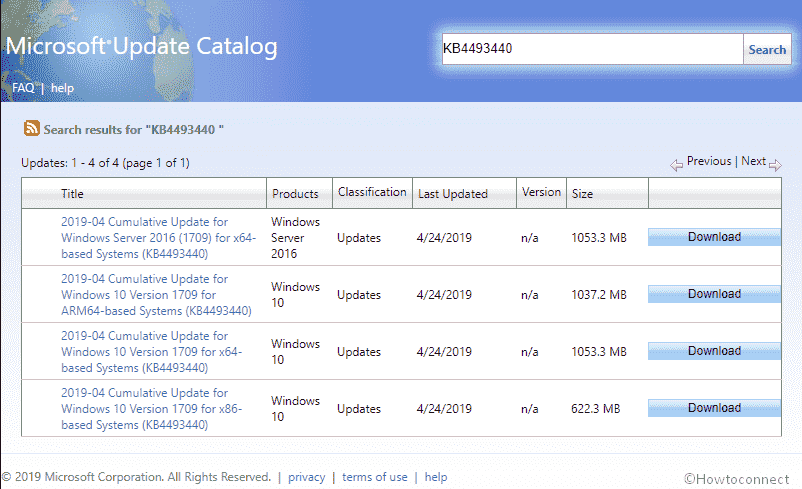 Before obtaining the newest cumulative updates KB4493440, we strongly recommend you to install the latest servicing stack update. This will enhance the performance of the update process in order to mitigate potential issues. To get KB4493440 through Windows update –

Step-3: This will take you to the Windows Update in the left pane, from here move alongside right.

Step-4: Select Check for updates option from here and wait for the searching ends.

Step-5: Click on the Download option available under the found update. Once you finish the downloading procedure, Install the update using the on-screen guidelines.

You are able to Download KB4493440 from Microsoft Update Catalog.