Early users of Google Keep, the company’s very basic note-taking app, will be happy to hear that Google just released a Chrome app for the tool. Google has released the Google Keep note over a month ago, and now recently it has launched a new Google Keep for Chrome application. Here is a new tool which is another way to access the recently launched service for taking notes even if you are not connected online on Chrome browser.

This application just looks similar to the Google Keep site, but it works even you are not online. In these newly launched tool, you can access your notes or create a new one even without an Internet connection. But you can’t insert or upload your images when you don’t have an internet connection. Another limitation is that new notes aren’t uploaded in the background in this situation.

The Google Keep’s existing web user interface  is not much different from the Chrome app’s interface, which has been embedded into a tablet-friendly version. Nevertheless, the new app makes the service significantly more accessible. Like the majority of Chrome apps, the Google Keep one works across all the major operating systems.

In the presence of the Chrome Web Store, the most important feature of the Google Keep app is it works even when you’re offline. Any notes that you create while you are offline are get attached to your devices once the internet connection is restored. “The Chrome app works offline because we all know that ideas (big and small) can be sparked at any time,” Google said.

Additionally, the Google Keep Chrome app offers full-screen access, which is useful if you find yourself keeping the app on your screen to track your day. With Keep, you can create a note or list with ease, requiring just a title and a body of the text. The only type of categorizing in Keep is through a color-coding system. Photos can also be embedded to add a little more to your Notes. 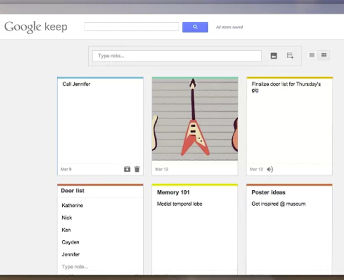 This service is launched in the month of March, Google Keep lets users “quickly write ideas down when you think of them and even include checklists and photos to keep track of what’s important to you,” Google said. Notes are stored in Google Drive, and synced to all of a user’s devices. The mobile version is available for devices running with Android 4.0 Ice Cream Sandwich and above via Google Play.

Once you’ve installed the new add-on, you’ll have access to a standalone window where you can add notes, to-do lists, photos, and anything else you’ll want to review later to Keep. There’s also offline support baked in, so anything you add will be synced up with the Android app once you’re back on an internet connection. Google still has a long way to go if it’s hoping to evolve Keep into a worthy Ever-note competitor, but at least it’s not pulling the plug just yet. There’s work to be done, but we stay impressed with Keep speed and ease of use even in its current, basic incarnation.