iPhone is the best available mobile phone that helps to stay connected in every condition. But connectivity fails during traveling in the remotest areas where mobile network doesn’t exist. Sluggish mobile signal prevents the iPhone to become non-functional in the remote areas when you are needed to connect with others. That issue could be solved through Mobile Satellite service. As you know that mobile satellite service doesn’t work on mobile signal. Therefore, it works effectively at the remotest place of the world.

Thuraya’s Mobile Satellite service is known after SatSleeve. The company priorities are iPhone user’s interest, and It has produced affordable mobile satellite service. SatSleeve is slightly bigger than iPhone. Its compact adapter provides users something substantial to convert iPhone into Satellite phone. It lets the changed iPhone to have strong connectivity beyond covering traditional networks. 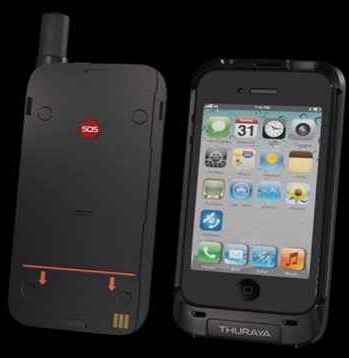 At this time, Thuraya’s Satellite network covers global regions like Asia, Australia, Africa and Europe. The SatSleeve mobile satellite service would be accessed through iPhone 4 and 4S in specified regions. It offers Voice service as well as SMS service in the remotest region wherever hardly any network connection are available. That means whether you are sailing into Pacific Ocean or climbing biggest ever Mount Everest, you will be able to stay connected with friends and family members. Indeed, Thuraya’s SatSleeve is an important mobile communication tool to have.

It lets users as well as enterprises that function in the remote locations to explore hidden places or deliver new ideas to them. SatSleeve is an ideal mobile communication tool for those who are involved into prolonged campaign to find incredible things in remote location. So far as pricing concern, Thuraya’s SatSleeve is costing $499 for providing Voice and Text inclined service. Though company is about to launch a whole model including Data support between price $600-$800 range.

Thuraya is planning to launch Android version of Mobile Satellite service for Smartphones in the near future. Still, it is not confirmed that when to SatSleeve will come and where to launch first. But, it is certain that Mobile Satellite service could not be ran in Indian Territory due to strict Law about of using. So, you don’t need to place order to grab SatSleeve while it avails to use in other countries.

More details of Thuraya Mobile Satellite Service to be seen at below placed link: