The Lockscreen of this app looks very cool and attractive. It is not a part of Ubuntu rather it is developed from the scratches. A screenshot of this app is shown below: 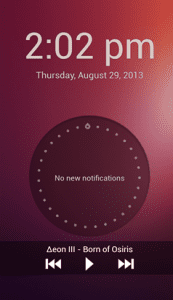 Ubuntu Lockscreen is available as a free download from the Google Play Store. You could have this app by searching it here in the play store.

How to use Ubuntu Lockscreen App for Android

Once you have installed this app on your device, run it from its icon present on your android device. When you run this application for the first time, it will ask to set it as the default launcher for your handset so that it could lock your screen when the next time your mobile is going to sleep. 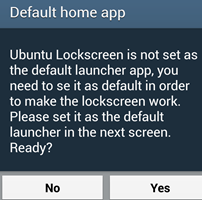 On the above window, click on the yes option and there you are with the new lock-screen of Ubuntu on your device. This new lockscreen will replace the pre-existing lock screen of your device. Again, you will be asked to choose a launcher for your device among the following: Nova Launcher, Touchwiz launcher etc. which is to be used along with the Ubuntu lockscreen app. You could choose the launcher which suits you the most. It should also be noted that if you don’t have any kind of launcher pre-installed on your device then Ubuntu will not ask this question to you of choosing any launcher. In that very case, whatever the default launcher is present in your device will be made the launcher for Ubuntu lockscreen.

After the selection of the launcher you are all done for starting your lock screen. Now you could easily lock your screen. You could also change some settings which are present on your handset previously. You could simply change the colour, music colour layout, notification animations and others as well using it settings option.

Ubuntu Lockscreen is really a very nice application for those who love different sets of customization. This app is mainly created to give its users a flavour of Ubuntu on Android devices. You will love various features supported by this app.