Yet another insider preview build rolls out – Windows 10 build 20170 – for the geek community and tech-savvies to test the new bunch of features that the tech giant is developing. There have long been rumors and anticipation of Microsoft trying to port some of the major Control Panel features into the Setting itself. This is supposed to add- and probably will add- to the comfort and convenience of users of Windows 10.

In this article, we discuss the progress made in this front so far, along with other features and fixes that are brought on and tested by Microsoft through this Insider Preview. So, gear up, let’s go ahead and examine Windows 10 Build 20170. See – Release Preview, Dev and Beta are Channels for Windows Insider Builds.

Given below are the features, improvements, and fixes introduced with Insider Build 20170.

Developers are paying adequate attention to this part. Insider Build 20170 introduces two improvements to the search bar in Windows. These changes simply make it easier for users to find what they need. The Search got an updated design with a new two-column layout. This new look makes the results more readable. You will have easier access to Quick Searches. And, for searching web results or navigating to different programs, type into the Search box as usual. 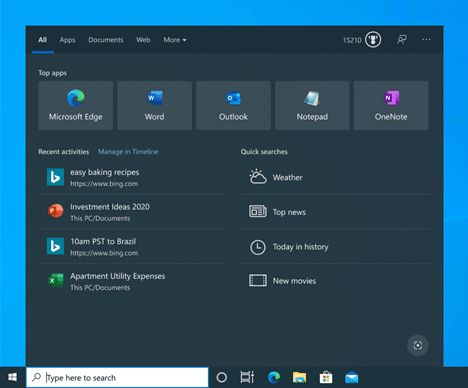 Another improvement in the Windows search bar is that it now supports web search for Dutch-speaking users.

Here’s the part we have been talking about. As mentioned, several of the Control Panel items are being eventually made a part of Settings. Another advancement in this direction is the additional inclusion of the default sound device option in the Sound settings. To check this out, go to Settings > System >Sound > Manage Sound devices.

Microsoft has been putting efforts to improve the graphics and the iconography across Windows. A small improvement in that direction that came with this build is a new Settings icon. We’re loving the improved look so far.

Windows 10 Build 20170 Other improvements and fixes

This build addressed several issues noticed in some of the earlier builds. Let’s take a look at them:

How can you be a part of the Insider community?

Are you interested in being a part of Microsoft’s closer circle that gets to check out the features in development? Here is how you can sign up for the Insider program.