Windows 10 Insider Build 17738 has arrived at the Fast ring level devices so be ready to enjoy the changes. This update also includes multiple fixes such as for Office application launching, Microsoft Edge downloading, Narrator problems.

You can navigate to Update & Security Settings and check for updates to receive Windows 10 Insider Build 17738 by now. However, the update has a few known issues but Microsoft is actively working and investigating them. 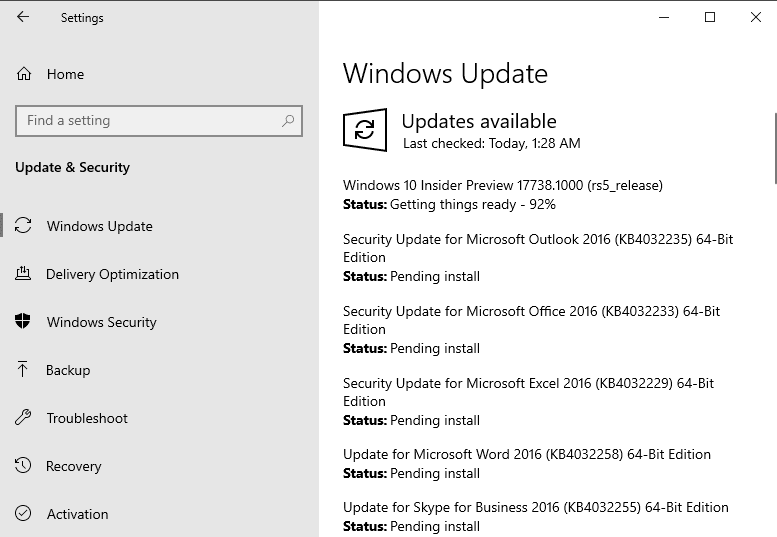 Windows 10 Insider Build 17738 included a solution of Office application launching problem from the store. The issue occurred in Windows 10 S Mode and shew an error about a .dll not being designed to run on Windows.

They fixed an Microsoft Edge browser’s inline definition pop up that would open a blank pane when reading.

They solved Microsoft Edge Find on page did not highlight and select the result.

There was an old issue running from previous builds that when you reset the built-in browser saved favorite was not working. You saw a star next to the favorite name rather than website’s favicon (if available). But this problem of Microsoft Edge is solved now in the Windows 10 Insider Build 17738 Redstone 5.

Windows 10 insider team fixed an issue where text copied from certain websites in the default browser could not be pasted into other UWP apps.

They solved a problem impacting Teams resulting all unsent typed text that is missing following the completion of an emoji composition.

Microsoft resolved hiberfil.sys would unexpectedly re-appear subsequent to upgrading even if it had been turned on.

They come up with the modification that improves the time it takes to bring the Task Manager window on launch.

Microsoft engineers solved the left side of the Store’s My Library section turned unexpectedly blurry until you hover.

When you open a big file in Notepad having Word Wrap option enabled it takes more time. Microsoft has rectified this problem in Windows 10 Insider Build 17738.

Windows 10 Insider team settled the option to set up a pin from the lock screen could get stuck as the built-in login method after you set a pin then remove.  The system couldn’t remember your preferred login method login screen.

They resolved WSLs tar and curl commands not working problem on x86 devices.

They solved Narrator Scan mode Shift + Selection commands in this build.  Therefore, the text will now be selected and highlighted properly in Microsoft Edge.

Continuing from the previous build the Windows 10 Insider Build 17738 will also encounter bugcheck (Green Screen Of Death) when you will delete a local folder synced to OneDrive.

After you will receive this update you’ll get that the taskbar flyouts as battery, network, speaker volume, no longer have an acrylic background.

Make Text bigger setting in the Ease of Access category may face text clipping issues. You will notice that the text is not increasing in size everywhere.

In the current build, infrequently Narrator does not read in the Settings app when you shift using Tab and arrow keys. In this case, give an attempt to switch to Narrator Scan mode for some time. And when you disable Scan mode once more, Narrator will now start reading. Moreover, you can restart Narrator to as a workaround for this problem.

When you will connect Mixed Reality to headset for the first with motion controllers, you may need to troubleshoot this for visibility at the second time.

Windows 10 insider team is actively working on IME is not able to type East Asian characters into certain text fields on Edge browser.