You might have used several Play music.  Play music gives you a smoothly running interface in which you can create your own playlist based on the ratings, softness, lyrics etc. Google Play music is also a Play music which has been in the market for very few days. It is like one of the Standard music with new features like a few bells and whistles thrown in. It is well designed and is used for streaming music.

Much like the changes being done in the Google+, Google store; changes are there which have been done in the Play music as well. It is now equipped with Google Now-esque card design. You can get this application from Google store.

How does this app work:

Once you got this app and open, you will find Play music option at the top left corner of its interface. For starting this, all you have to do is to click on it or tap it. Tapping on it opens several options like Listen now, My playlists, My library, Radio etc.  There is also an option of Explore there which makes this app exciting as you can explore a lot more songs on the Radio.

Now there is one more fantastic change in its interface and that is with the look of the music Player when the songs are being played on. It looks very nice looking at it while the background keeps on moving. SongsAppearance storedd in the My playlist has also changed i.e. like before where Songs are there in the form of tiles, they are now in the forms of cards with the name of song being written down on it.

In its new look, everything is now more colorful as they are in the older version. You can handle this app with more ease. This is really a nice improvement where we have a dark and steady background in older Play music. With these certain changes being done in the Google Play music, this app looks like a Media Hub rather than just a Music Player. However, there are no changes being done in the functionality of this app i.e. you can choose to play desired songs either from the library or you can stream it. 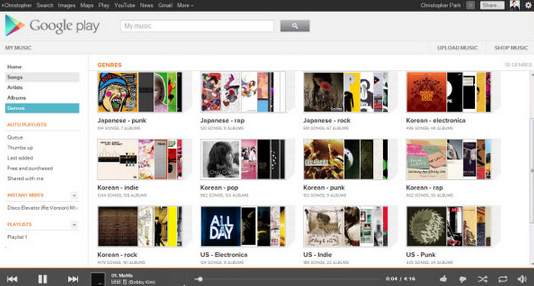 By the improvement of this app, Google is trying to make its users more satisfied and convenient. In this app, now you can search for multiple songs. Another exciting feature of this app is that you can create your own new Radio Station based on an artist in your Library. This service provided by the Google for its users is really Awesome.