Asher’s Maze is a windows 8 app designed specially for children. While playing this game, I remember how I used to play with such maze problems during my childhood. This also resembles Pacman in some way. Like the way in Pacman cat is behind the mouse and mouse has to save himself by eating all the power points. Just similar to that, here you have to eat all the fruits leaving behind all the bears, falling stones and many others. Unlike Pacman, here you have the power to make your enemy disappear. All you have to do during the entire game is to be quicker than your enemy. Obviously, Asher’s Maze game becomes more interesting as game proceeds further and level increases. You can unlock 19 levels for complete free. For playing the remaining 6 levels you have to buy this gaming app. It depends on you whether you want to unlock them or not which you would come to know once you start playing this game.

The interface of this app is neat and clean just like the way we used to see in the newspaper or like the Pacman. While playing this game, you will come to know about that how fast you could get a way to solve this maze.

A screenshot of Asher’s Maze game is shown below: 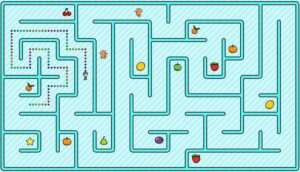 A link has been provided at the last of this article from where you can access this gaming app.

How to use and play Asher’s Maze game

Asher’s Maze gaming app has been developed keeping in mind the children love for the Pacman game. However, adult can also play this game as it consists of many different levels which might they consider good for them too. Initial few levels are very easy and it requires less than a minute to complete it easily. Once you progress in the game you will find new levels which are quite difficult to crack in less than one minute. But it could be easily solved in a few minutes. Therefore, this is a lovely game for all those who don’t want to waste too much time on a game as it finishes very fast. Children would really love this game and thus it would be a little exercise for their brains to find out a way out.

As level increases, maze size starts to become bigger and bigger with increasing the number of blocking and disturbances in the form of bears, falling stones etc. You have to very careful of all the directions and specially in the direction in which you are currently moving. Try your best to keep away from them. The moment you got touched by one of them your game finishes right there. The characters here move very fast, with proper back and forth motion. There is one interesting thing of this game and that is, you can in advance decide a path for your character by using click-drag method and lets your character move on that very path. This method is very good for the initial levels, however as the level increases, this is not a good idea to predict a whole gameplay in advance as then, obstacles could come in the middle letting your character die. However, here you can draw a subset of complete path by using the same click-drag method.