At the beginning of 2013, Facebook Messenger feature is revealed for Android and iOS which lets to start voice messaging service. The official Facebook app of Android has started the same service a few days ago. Now it is present on updated Facebook 5.4 version app for iPhone device. It provides an option to add audio recordings with messages, record and share videos without exit the app. New Features of update iPhone Facebook  app 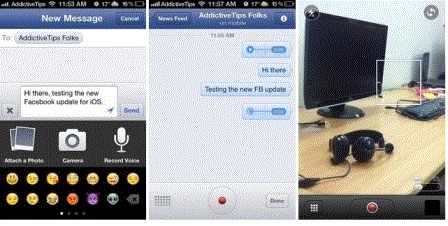 Note Existing iPhone user can get the latest version of Facebook app through the search in Updates section of the iTunes App Store. New iPhone users can download it by clicking the below given link.