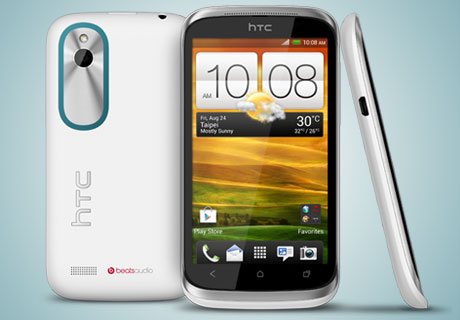 HTC has launched new HTC Desire X to meet user’s needs for a more budget model.  It was launched as an attempt for the legions of the ex-HTC Desire. The specs of the phone are remarkable with the best specs. It is powered by a dual- core 1GHz Snapdragon S4 processor. It has a super LCD screen which on an average measures 4-inches. The clarity of the screen has been improved. The glare has also been cut down by making the screen raised up and laminated.

It can be much better designated as a Smart phone than a Super phone was the words of Graham Wheeler, who is the director of product commercialization at HTC. It has still been successful in changing design language from a number of models in the history of the company. The shell of this mobile has the same feel to the HTC One which has poly carbonate  The slots for the normal sized SIM and the micro SD car are hidden inside a back cover which is removable.

Central power/lock button is very unique. The phone is very palm friendly when it is held in the hand. Power button seemed to be placed at a very weird place but within a short time of its use, it was realized that, the button was very fit for the design. There are three soft keys at the bottom which are very user-friendly. It is embedded with the Android Ice cream sandwich. It also houses a micro USB slot and the headphone jack at the top.

The camera is described as the most striking feature of this phone. Its design direction is very impressive. It is a 5 MP camera. Another striking feature is the wide range of covers to be chosen from. They fitted the device well, but made it a bit hefty even though they rightly matched the mood and the personality of the user.

Overall, this one device is very appealing and a must have for everyone who flaunt their styles. Hope, this article was quite informative. Please do not forget to leave your valuable comments.