Microsoft has placed KB4103714 cumulative update with significant fixes and few enhancements for the Windows 10 version 1709 build 16299.461. In addition, Servicing Stack update  KB4132650 has also taken place in the update catalog. If you install both on your device, keep in mind to get the SSU first then LCU.

KB4103714 Update for Windows 10 version 1709 release note comprises the list of problems that Microsoft addresses and fixes. See the detail ahead. 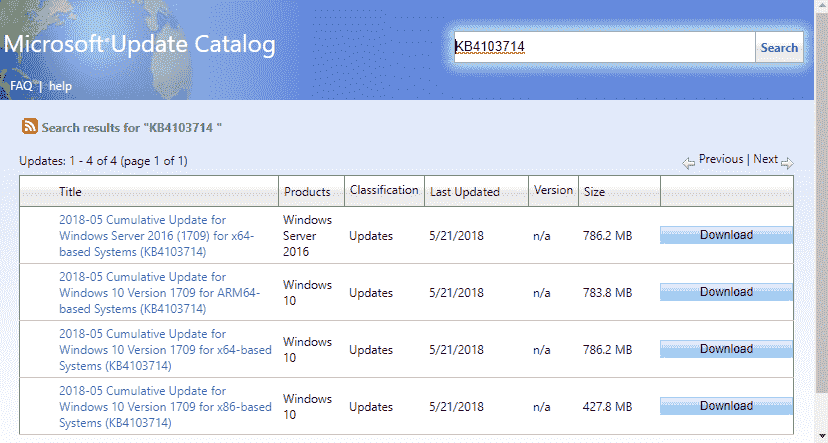 To Get the standalone package for KB4103714 cumulative update go to the download location Microsoft Update Catalog website and find as per your system requirement.

Microsoft is working on an issue that causes Internet Explorer dialogs on a second monitor to also prompt on the primary monitor when using Projecting to This PC.

Windows 10 experts take on a problem with Microsoft Edge browser windows in remote sessions in KB4103714.

They attempt to solve a reliability trouble in .NET applications when using a Japanese IME in a textbox.

Microsoft attempts to solve a reliability problem that may stop Microsoft Edge or other applications to respond.

Windows 10 experts work on the problem for you to create a new audio endpoint while audio or video playback is beginning.

Microsoft tries to settle a bug with Bluetooth devices that fail to receive data after a reboot.

They are making a try for an issue to resolve that can prevent the touch keyboard from displaying reliably in some cases.

Microsoft is taking on an issue that prevents adding performance counters to the Performance Monitor on systems with many processors.

They try to solve BitLocker that switches to recovery mode when updates are applied in KB4103714 update.

In KB4103714 update, they worked on a problem that rises sporadic authentication issues when using Windows Authentication Manager.

Microsoft is attempting to rectify an issue where client applications lead Windows Authentication Manager to stop working when making a request to the server.

They are correcting a problem with the invalidation of the Windows Authentication Manager token cache.

Windows 10 team is working on an issue that generates a timeout error when a VPN tries to disconnect from a device that is in the Connected Standby state.

It throws an explicit error when plugins fail to connect to prevent timeouts.

Microsoft tries to solve a problem RetrieveAllVirtualMachinesComponentsMetadata() to stop responding. This occurs when you add persistent memory controller to running the DiskShadow utility after adding.

They attempt to settle an issue that causes a VM to prompt an error after creating the VM with static memory. After enabling HYPER-V and disabling NUMA in the BIOS on a physical machine that has more than 64 logical processors this situation arrives. The error is “The data is invalid. (0x8007000D)”, and the VM fails to start.

They work on docker builds that fail with the error message “hcsshim::ImportLayer failed in Win32: The system cannot find the path specified.”

Microsoft’s team is working to settle down a trouble as unresponsive foreground window in a RemoteApp session when you use grouped windows.

They try to solve a RemoteApp session that may finishes in a black screen when maximizing an application on a secondary monitor.

Windows 10 experts work on a bug with application association in the DISM tool in KB4103714 update.

To download and install KB4103714 update, navigate to Settings => Update & Security => Windows Update and make a click on Check for updates.