Microsoft has sent the cumulative update KB4345420 for Windows 10 Version 1709 Build 16299.550.
This patch contains quality improvements about the restart of the SQL Server and DHCP problems. However, you will get the update automatically but you may also get a file from the Microsoft Update catalog to manually install.

KB4345420 also has known issues about Device guard and they are working to resolve this. We are here with a download link and the full detail of the patch. 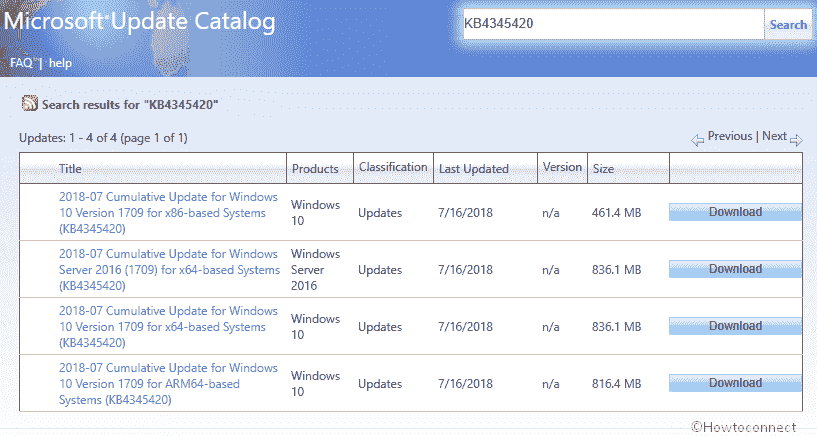 Microsoft works on 0xD1 Stop code which occurs because of a race condition after installing the July update. This error may cause devices to run network monitoring workloads.

When an enterprises user requests a new IP address he may get an invalid configuration. Windows 10 team is trying to fix this issue called DHCP Failover server that leads to a loss of connectivity.

Microsoft addresses restart of the SQL Server service not working issue. The failure occasionally throws the error, “TCP port is already in use”.

In KB4345420 update, the Windows Server 2016 team works on The W3SVC remains in a stopping state, but cannot completely stop or it cannot be restarted problem. The error troubles when an administrator attempts to stop the World Wide Web Publishing Service.

When you have installed previous updates on regular basis, only the fixes existing in this patch will be downloaded and installed.

Microsoft knows about the following issue in the current cumulative update.

Your Windows 10 will automatically download KB4345420 and install through Windows update. In case, you want to manually confirm follow-

Press the combination of Win+I and pick Update & Security from Windows Settings.

On the following page, click on Check for updates.

If you have a choice to get stand-alone package for this update, click on the following link –

Download KB4345420 from there ensuring the bit of your system and install.