Here comes KB4493437 cumulative update, with a plethora of fixes and improvements. This patch for Windows 10 version 1803 will take the OS to build to 17134.753. The update mainly focuses on the problems with Internet Explorer, Office app, ShellExperienceHost.exe, Japanese date format, touch screen, and BitLocker. In addition, there are many topics included in the patch released on 25 April 2019.

You can let your system automatically download KB4493437 from Windows Update Services. Alternatively, you can get the MSU format of the file in the standalone package from the update catalog site. As recommended by Microsoft, keep it noted to install the latest SSU before you get the cumulative updates. This helps to stay out of possible troubles while installing the latest cumulative updates. 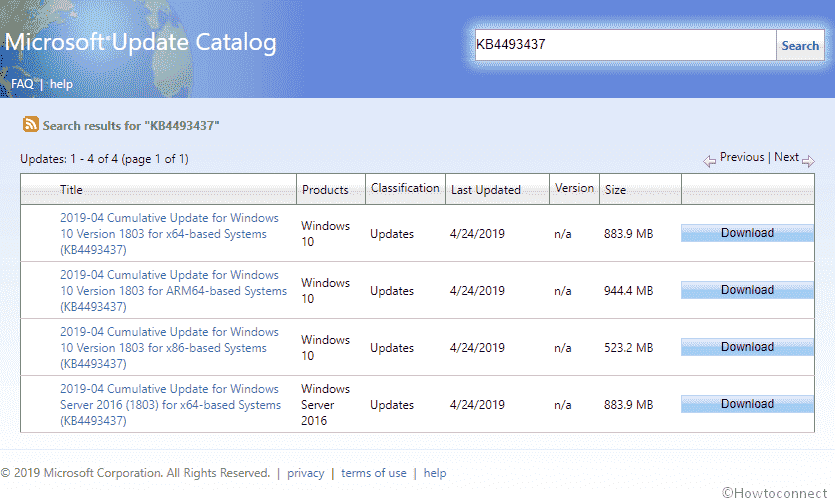 To see the collection of all the patches visit – Windows 10 Cumulative Updates List.

Following are the noted known issues with this update –

There are certain issues with folders or files which are on a CSV (an acronym for Cluster Shared Volume). Renaming or such operations performed on those files and folders often fail. They are mostly accompanied by an error message, ‘STATUS_BAD_IMPERSONATION_LEVEL (0xC00000A5)’.

Usually, the error occurs as the user tries operating in a CSV-owner node from a process which is not having the administrator privilege. So, as a workaround, for now, try performing the operation from –

Microsoft is working on a resolution and will offer an update in an upcoming release.

There are some problems faced when starting a device using the PXE (an acronym for Preboot Execution Environment). This occurs when opening it from a Windows Deployment Services server configured to use Variable Window Extension. It may prematurely close the connection to the WDS server while downloading the image. This issue does not impact clients or devices that are not running the Variable Window Extension. Microsoft is attempting to resolve this issue.

You can give an attempt to any of the following workarounds by disabling the Variable Window Extension on WDS server and mitigating the problem.

After you disabling, Microsoft suggests restarting the WDSServer service.

Step-2: Once there, select Update & Security.

Step-3: In the next page, navigate to the right pane, and click on Check for updates.

Wait for KB4493437 to completely download and choose Install finally.

If you have any issue in getting the patch then go to Microsoft update catalog and get the file in MSU format. After downloading, right click and select Install from right click context menu.