The patch Tuesday update for Windows 10 1809 – KB4494441 – is here. It mainly brings security updates and improvements by adding protection against various vulnerabilities. The cumulative update also addresses several issues. You can find the notable changes and improvements in this quality update in the following sections.

The system will automatically receive KB4494441 release using Windows Updates and notify you to restart. Your Windows will receive only the new fixes if you have already all the previous patches. You are able to also download the stand-alone package for the same from the Microsoft Update Catalog site. Make sure you have the latest SSU before you get the latest cumulative updates. 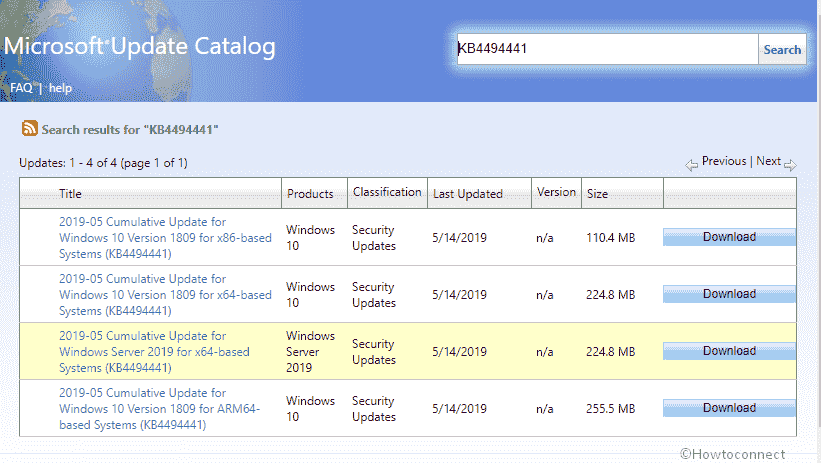 Users are facing some troubles as they try to start a device using the Preboot Execution Environment (PXE). The issue occurs when you are starting it from a WDS or Windows Deployment Services server configured to use Variable Window Extension. It may end up in prematurely terminating the connection to the WDS server while downloading the image. This problem does not affect clients or devices that are not using the Variable Window Extension. Microsoft is attempting to resolve this issue

Try and see if any of the below workarounds disable the Variable Window Extension on WDS server and mitigate the mess up.

Microsoft is trying to fix it permanently and they will provide a resolution in an upcoming release.

There still are the recently detected issues with folders or files which are on a CSV (Cluster Shared Volume). Renaming or such operations performed on those files and folders often fails. They are mostly accompanied by an error message, ‘STATUS_BAD_IMPERSONATION_LEVEL (0xC00000A5)’.

Usually, the error occurs as the user tries operating in a CSV-owner node from a process which is not having the administrator privilege. So, as a workaround, for now, try performing the operation from –

Microsoft is engaged in finding permanent resolution and will send an update in an upcoming release.

There is a problem with printing from Edge web browser or other Universal Windows Platform applications. Users attempting to print receive the error, “Your printer has experienced an unexpected configuration problem. 0x80070007e.”

As the other issues here, Microsoft is trying hard to bring a resolution and will provide an update in an upcoming release. Until then, users can use other reliable browsers.

Ever since the installation of KB4493509, the devices with certain Asian language packs installed tends to receive the error –

In case, you are still facing the issue even after reinstalling the language pack, users are advised to reset the PC. For this:

Go to Settings => Recovery.  Then, select Get Started under the option Reset this PC. Finally, select Keep my files.

If you haven’t installed KB4494441 till now then navigate to Settings => Update & Security => Windows update => Check for updates.

Moreover, you can download the  Standalone of the patch from the Microsoft update catalog.