May ’19 patch Tuesday is here with a good lot of updates including KB4499179 for Windows 10 1709. The cumulative update takes the build to 16299.1146. The patch has protection against newly detected vulnerabilities and offers several fixes as well as security updates.

1709 users should note that Windows 10 version 1709 has reached the end of service by April 2019. Therefore, no patches are available for 1709 Pro for Workstation, IoT Core, Pro or Home versions thereafter. As for loT, Enterprise, Enterprise, and Education editions, the update services will be obtainable only for another 12 months. So, Microsoft recommends you to upgrade to the latest version as soon as possible. Getting upgraded to the latest version would ensure that you keep receiving the latest features and security updates. See all the patches on a single platform – Windows 10 Cumulative Updates List. 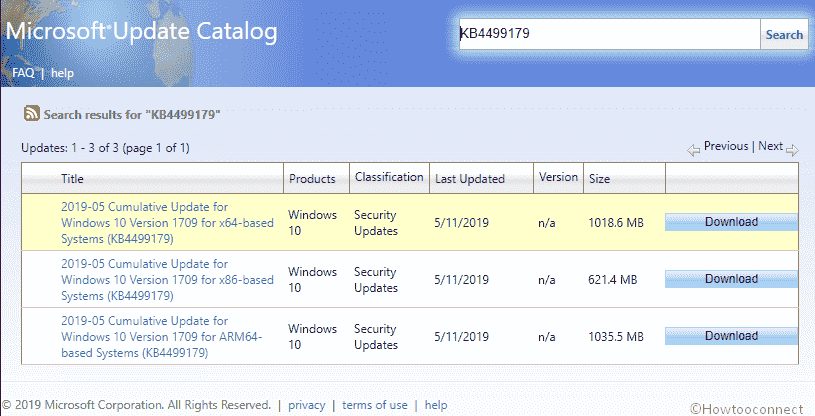 Listed below are the improvements and fixes that May 2019 patch Tuesday update for Windows 10 1709 has to offer.

Update  KB4499179 has just one known issue, that is with folders or files which are on a CSV (Cluster Shared Volume). Renaming or such operations performed on those files and folders often fail. They are mostly associated with an error message, STATUS_BAD_IMPERSONATION_LEVEL (0xC00000A5).

Generally, the error occurs as the user tries operating in a CSV-owner node from a process which is not having the administrator privilege. So, as a workaround, for now, try performing the operation from –

Microsoft is working on a permanent resolution and will provide an update in an upcoming release.

If the automatic update settings are enabled, your device will automatically download and install KB4499179 patch. In case you have all the previous updates are received and intact, only the added fixes will be downloaded. You can also get this update’s the stand-alone package from the Microsoft Update Catalog site. If your system is experiencing any delay in receiving this patch, try this –

Before installing the updates, note that it is recommended to install the latest SSUs. Your device will receive the latest servicing stack update along with the update automatically if you have the Windows update enabled.