A new cumulative update KB4501835 is unfolded by Microsoft for Windows 10 on May 01, 2019. This patch is here for version 1809 as quality improvement in order to take the Operating System to Build 17763.439. The major issues on which the company has considered or focused are – the Japanese era, NLS registry, CALDATETIME, IME, UWF, and lots more. Additionally, this update introduces a collection of various fixes and stability improvements to make the OS more stable where it retains other features almost the same.

Users may get KB4501835 rollout as an MSI file format directly from the Microsoft update catalog site. Generally, Insiders get the patch through the Windows update by itself. However, the manual installation is obviously an easier option when you fail to get the patch automatically. As recommended by the company, it would be beneficial to upgrade your machine to the current versions to have an experience of better UI and to sustain greater reliability. To see all the patches of the entire versions, go to Windows 10 Cumulative Updates List. 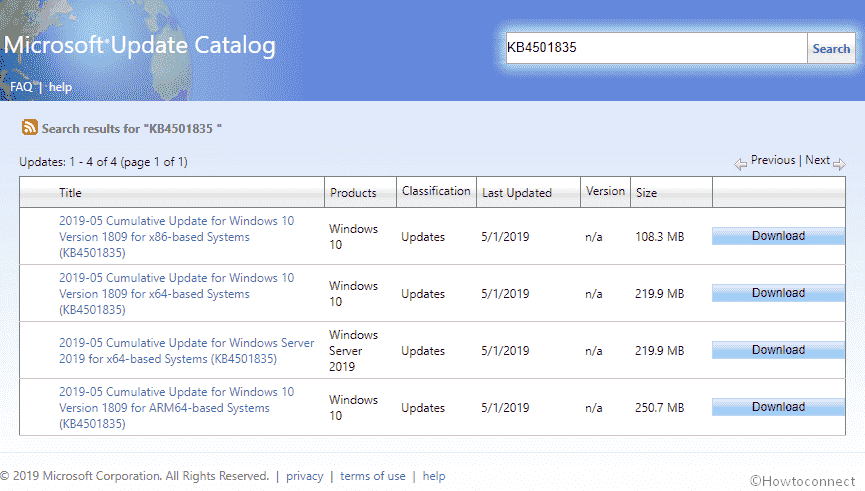 This update of the Build 17763.439 is actually a bug fixing patch carries no new feature to the OS rather comprises a compilation of quality improvements are as follows –

Before getting the current cumulative updates KB4501835, we suggest you, install the latest SSU. This will enhance the performance of the update process in order to mitigate potential issues and also helps to stay out of possible troubles while installing. To get KB4501835 through Windows update –

Step-3: This will let you bring to the Windows Update in the left pane, from here go alongside right.

Step-4: Hit Check for updates option, and then wait for a while.

Step-5: When the searching ends, click on the Download option available under the found update. Once you finish the downloading process, Install the update using the on-screen guidelines.

You are able to Download KB4501835 from Microsoft Update Catalog.