Every cautious and careful Windows users will make it a point to keep their software up to date. Microsoft makes the tasks easier by offering easy to get patches on a monthly basis. KB4534273 and KB4534276 too are one of them and don’t contain any feature introductions or changes. They do, however, contain certain important fixes and improvements. This article will discuss the known issues and highlights of both the cumulative updates and also will explain how you can get them. 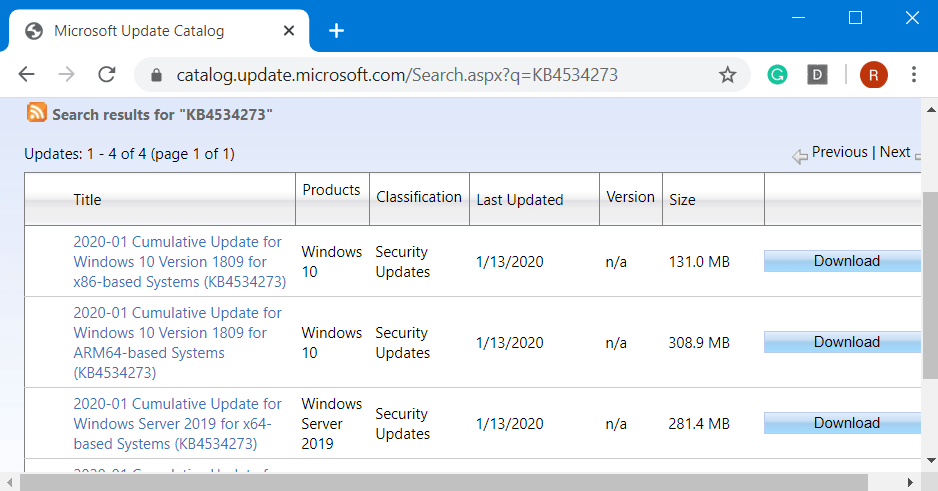 There are three known issues with KB4534273, which are as given below, along with their suggested workarounds –

Some functions like renaming that users perform on files or folders on a Cluster Shared Volume (CSV) sometimes fail to accomplish with an error message that reads, “STATUS_BAD_IMPERSONATION_LEVEL (0xC00000A5)”. This happens when you perform the operation on a node having a CSV ownership or from a process that does not accompany administrator privilege.

While Microsoft is working on a permanent solution in the matter, you can try performing the operation in either of the following ways –

Another prevalent is that causing an error in devices with some Asian language packs installed. The error reads, “0x800f0982 – PSFX_E_MATCHING_COMPONENT_NOT_FOUND.”

Try the following workaround for this issue.

Uninstall and then reinstall the recently added language packs using the instructions given here.

Then, hit Check for Updates. Find and install the April 2019 Cumulative Update.

In case the above attempt doesn’t seem to be mitigating the trouble, reset your PC following these steps –

You can expect a resolution in the matter in one of the upcoming releases.

While you attempt to set up a new Windows device during the Out of Box Experience, you might come across a complication. You may not be able to generate a local user while using the Input Method Editor (viz IME). This problem may affect you while using the IME for certain Asian languages as well.

This trouble does not, however, affect the use of a Microsoft Account during OOBE.

There are 3 ways to have the update. First, if your OS is set to install the patches automatically, then you’ll not have to do anything. The system will detect the update and make the patches on its own.

Second, you can download the standalone package from Microsoft’s Update Catalog.

Finally, in case you haven’t received the automatic update and/or would like to manually check for and get the update, you can do so by following the below steps –

Now, note that you should make sure to get the respective SSU before you download any cumulative update to ensure a smooth process.

A quick reminder for the users who are still using Windows 10 1709 is that it is becoming obsolete. That is in the sense that the version has reached its end of service. For getting the best of Windows 10 and to explore various new and interesting features that are being introduced by this software giant, you should update to the latest version as soon as possible.

This patch mainly contains certain updates pertaining to security, as given below in points. Note that, in case you have all the previous package installed, only the new fixes in this one will be coming down when you download it.

There are some complications, a few pre-existing with earlier updates. The problems, along with the officially suggested workarounds are as follows –

This problem has been around for a while. Some users had reported that, when attempting to do some operations like renaming that users perform on files or folders on a Cluster Shared Volume (CSV), it fails with an error. The message goes, “STATUS_BAD_IMPERSONATION_LEVEL (0xC00000A5)”. Basically, this happens especially when you perform the operation on a node having a CSV ownership node or from a process that does not accompany administrator privilege.

Microsoft has not been able to come up with a solution sufficient for addressing the issue. However, meanwhile, you can try performing the operation in either of the following ways –

The next and final problem in this patch is the failure to generate a local user when using the Input Method Editor (in short IME). This complication comes into view when setting up a new Windows device during the phase of Out of Box Experience (OOBE). You may notice this issue occurring in case you are using the IME for some Asian languages, particularly, Chinese, Japanese, or Korean languages. This issue does not, however, affect the use of a “Microsoft Account” during Out of Box Experience or OOBE.

The developer is working to find a resolution. You may expect to get an update in this context in an upcoming release.

If you have the automatic update system of Windows 10 intact and uninterrupted, you don’t have to do a thing. The OS will download and install the patch on its own. However, in case you notice the unreasonable and prolonged absence of updates, you can check it in the following manner –

Note: It is important to have a stable and uninterrupted internet connection during the process.

Alternatively, users can grab the stand-alone package from the Microsoft Update Catalog site.

In this context, remember that the developer recommends downloading the latest Servicing Stack Updates prior to the cumulative ones. This will ensure a smooth installation of the LCUs.