While talking about an operating system of the computer, Windows is probably seldom dependent on the command line. We came across a long way till today avoiding its use. But as Windows 10 is already out,  it’s high time that we should learn about PowerShell vs CMD.

PowerShell and Command Prompt are quite dissimilar from each other based on their features and uses. Though both of them are pretty similar from outside, they are quite different from each other. Powershell was introduced initially in Windows 7.  It is little bit complex having a well secured and powerful shell and advanced scripting languages than that of the CMD. This is the reason; it is introduced in Windows 10 as a default choice.

Functions in Powershell are a bit complicated than orthodox Command Prompt. But it is more powerful too especially on Linux and other systems like UNIX. In the following section, we will try to figure out the distinction between PowerShell vs CMD.

If you not an advanced user, then these are the 30 Best Commands (cmd.exe) in Windows 10 that you should know.

PowerShell vs CMD – What is the Basic Difference on Windows 10

1. Command Prompt was first to come in action

CMD (Command Prompt) was the first to come along with Windows NT and afterward. It was brought to the market by Microsoft with a command line interpreter which was previously well known as “cmd.exe”. It enabled the users to deal with the operating system that uses the text-oriented commands and parameters.

To be a little bit advanced, though it is told to be introduced first actually, it was not. In the past, Windows used to have a command line interpreter which was well known as COMMAND.COM. Microsoft used this feature in Windows95, Windows98 and ME.  People used to know it as MS-DOS. But it’s a fact that Command Prompt was much advanced than the MS-DOS interpreter.

In spite of having a graphical character of Windows, the Command line feature was never and will never be outdated. It has an optimum power with flexibility which cannot achieve point and click interfaces like batch scripting. You are proficient enough, you can get your job done faster even using Command Prompt. Command Prompt is actually suitable for average users though it has a tendency to make some mistakes during operation. That was the reason, experts wanted an updated version for skilled professionals and having an error-free operation. Microsoft then introduced the Powershell as a solution for errors and an ideal tool for skilled people in the store. From that point, we can say that PowerShell is actually a replacement for Command Prompt.

PowerShell upgraded the whole command interpreter to a new level of perfection. If we compare the Command Prompt with a JAVA operated phone back in 2004 era, Powershell is an Android in recent times. It is updated, furnished and can perform a lot more than Command Prompt. It might not be the best one in respect of command line interpreter but obviously, this is more powerful enough to meet user demands.

Microsoft started working to build PowerShell in 2002 in the name of Monad. Microsoft took Monad in the front in 2005, which was designed to be extensible by users. Later on, it was renamed as PowerShell in 2006. And then it was merged with the operating system.

PowerShell enables a programmer to create his own commands and scripts by using C# programming language. Both of the PowerShell and C# are consolidated with the .NET framework of Microsoft. Means to say is, PowerShell will facilitate a skilled user to access all the features that were in use to make their own new commands and scripts applying least efforts than before.

For reference, read How to Automate .Net Framework 3.5 installation on Windows 10 to know more.

3. PowerShell is a storehouse of upgraded features

PowerShell offers a bunch of advanced features. Features like completing background tasks, finishing the task remotely, using command piping and automation and so on. With these advanced features, PowerShell has made itself the first choice for skillful users.

As an average user, you really don’t need all these features but if you are one of the administrators and power users, you need these by your side. Try using it to see the potentiality of PowerShell. 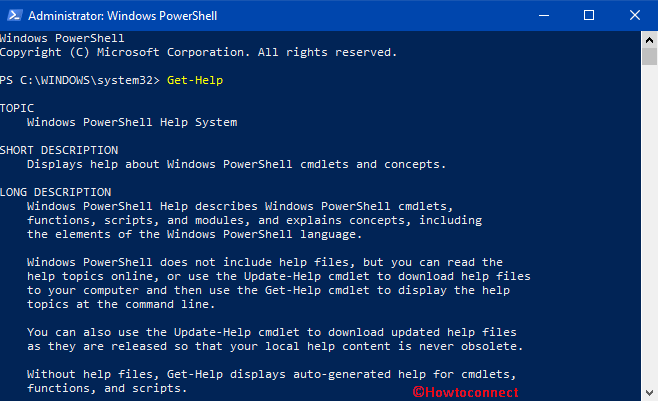 Another small yet important point that makes PowerShell vs CMD apart from each other is the output of the commands. In addition to texts, PowerShell also provides a collection of objects. For example, here, you can query any property of the object such as its name, memory consumption.

Now, when it comes to CMD, the output is just a text and thus users have to parse the text separately.

5. Improvements made on PowerShell in Windows 10

PowerShell has the following upgraded features waiting to come along with the introduction of Windows10.

The “package manager” is a type of software that allows managing all the software that you download or install all together. With this feature, you don’t need to surf websites to find software rather you can have it in package manager which was used be known as OneGet beforehand. You can pick a suitable package for you by subscribing to various repositories.

Remote systems were connected by an encrypted connection from the earlier days using the secure shell. It can be an easy task for the outsiders to intercept your data if you don’t have a secure shell.

Before Microsoft introduces Windows10, there was a need of the third party for the solution used to be known as “PuTTy”. But they have already announced that there will be no need of a third party as there will be independent SSH support system in PowerShell from now on. This will be very effective and efficient for the users once it comes into action.

Tabular Representation of PowerShell vs CMD

You can anytime Make Command Prompt Transparent on Windows 10.

Powershell Version 5.0 will have language improved with classes and enums, advanced built-in commands, syntax coloring, advanced features for existing commands. These will make the command line more furnished and upgraded. We have seen sharp distinguishing between PowerShell vs CMD. It’s now up to your level to choose the best one and get facilitated with any of these Systems.