The basic recommendation given to every user to develop their Windows 10 computer blazingly fast is to optimize the paging file. In this article, we will help you with a few formularizations you need to tweak paging file. Also, we will share a light on the paging file settings.

In this post we have illustrated How to Tweak Paging File for better Windows 10 Performance, its basic concepts furthermore customization methods.

Basics of Paging File in Windows 10

Another name of the paging file is Virtual memory. When the real storage aka the physical RAM of your PC gets saturated, Windows consumes a space of your hard drive which is known as virtual memory. Let us explain this in a more simple way. Suppose you have a computer whose real storage capacity is 2 GB and you have installed various applications that result in needing more than 2.5 GB of memory. In this state what Windows do is that it consumes its own 2 GB memory and then puts the free space of hard drive into utilization. This is known as virtual memory or in other terms paging file. Thus, depending on your active applications, Windows enlarges and contracts the paging file as needed. Hence, when your computer uses paging file the performance of your computer slows down. Never miss this article – How to Customize Paging File Size for Disk Drives in Windows 10.

How to Tweak Paging File in Windows 10 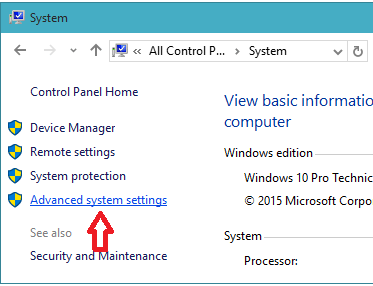 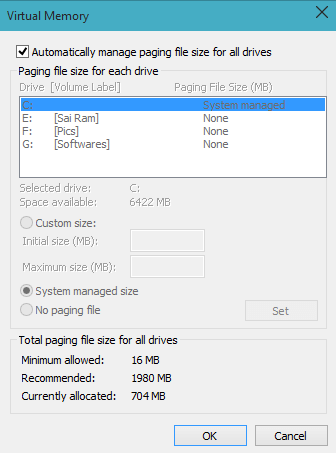 You need to keep certain points in your mind before you proceed to tweak paging file in Windows 10. In order to correctly set your paging file, you have to follow basic norms. 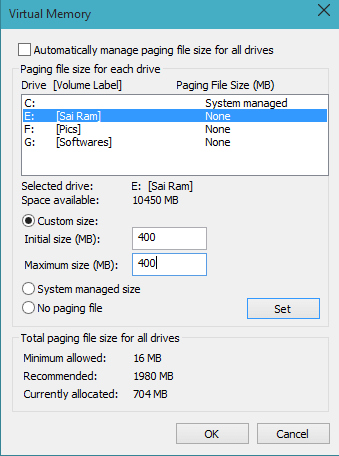 Paging File size depends on the size of Physical memory of a computer.  It can be lowest 1.5 times and highest 4 times of RAM. Suppose your PC has 1GB of Memory then Paging file size should start from initial 1.5 GB and the finish up to Maximum 4GB. If you believe in precise calculation then see the following table

We hope the information provided about Tweak Paging File in Windows 10 in this article will be quite helpful to you.