The Samsung Galaxy S4 has come with 13 MegaPixel camera with dual-mode functionality. Samsung presents two new features to improve the camera functionality with the Galaxy S4. The both features are Drama Shot and the Eraser. The Drama Shot lets you to take nonstop images of playing video and set many images in one picture or frame. The Drama Shot feature facilitates users to view and capture all the action in single uninterrupted time-lapse image effect. For instance, while you take a picture of your sandy going for a jump then the picture might comprise five or six images of the jump itself.
Related Post: Set Air View on Galaxy S4 to use Gesture Control 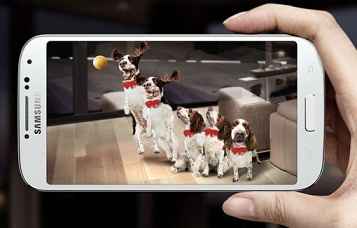 The Samsung’s new Eraser mode feature lets you remove unwanted things from a photo. Suppose you are in a busy park and attempting to take a picture of your family only. Then it is not easy to grab a shot in this condition. Because some other persons can appear in your captured picture. Using Eraser mode feature, you can simply erase any unknown people from the picture.

Above discussed both features of Galaxy S4 are quite user-friendly. So, I am going to provide a helpful video tutorial at the bottom to use them more successfully and make unique pictures.