You might be wondering about Suspended Status icons in Task Manager on Windows 10. The green symbols exist in the rows of multiple processes. Usually, you find a very little amount of resource usage for the items displaying the Suspended icons.

The Suspended symbol was added in the Anniversary update but after a span of time, it was removed. Now Windows 10 April 2018 update has brought the icon to show the real status of a process. 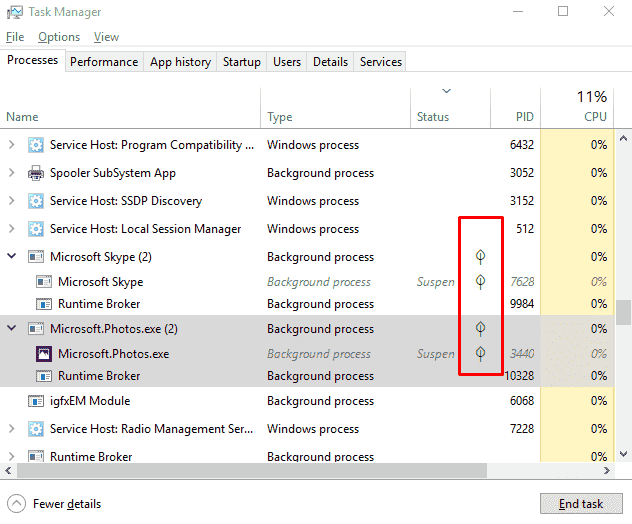 A Process that indicates the Windows apps on your system and live in one of three states: running, suspended or not running. When you open an application from the Start menu tile or list, the Task Manager includes it in the Process list. In fact, it enters into running state and this continues till you are interacting with the app.

One scenario occurs when you minimize the app or navigate for any cause and begin working with other. The process, at this very time, goes to suspended state and starts displaying the icon. The app runs in the background but doesn’t remain active so you see the symbol. As long, you keep it minimized the Suspended state continues.

But as you restore (maximize) the application, the symbol will disappear as it again gains the running status.

See to check which process is absorbing your system components – How to Analyze Resources Performance in Task Manager Windows 10.

This is an opportunity for the application to seri­alize any state it might need for when you resume or re-activate. When you notice an app is in the Suspended state, Windows suspends the process and threads of its process. As you switch back, the threads get unfrozen and the application regains running state.

This is the mystery of the Suspended green icons in the Status column of Task Manager in Windows 10.