The latest Windows 10 Build 21277.1000 to Windows Insiders is out in the Dev Channel for all the Windows insiders. As you probably know, the Redmondiands are offering Windows Insiders in the Dev Channel the option to install builds from the RS_PRERELEASE branch. Insiders will be obtaining the present build as an optional update via the Windows update seeker experience. Essentially, it indicates that Windows Insiders will have the choice of whether or not to install the currently offered RS_PRERELEASE build. Once an insider chooses to go ahead with this, they will continuously receive RS_PRERELEASE builds going forward. You might want to note that this optional experience is just temporary.

Note that this update has several features like the updated emoji picker, redesigned and improved touch keyboard, theme-aware splash screen, voice typing. Further, those who were removed temporarily earlier this year will be added back as insiders after this update. You still might want to note that some of these features might be available only to a select category of Insiders. You can check out the known issues, resolved bugs etc in the following parts of the article.

First of all, remarkable for Windows Insiders – If those who are signed up for the Insider program decide to install the RS_PRERELEASE build, they will not be able to move back to FE_RELEASE builds as their computer will now be on a higher build. Still, a useful opton available up to 10 days on installation would be to roll back to a previous build. Although you can use a tweak here – How to change the roll back period to 60 days in Windows 10.

Windows Insiders who have ARM PCs can check out the x64 emulation by installing x64 apps from the Microsoft Store or any other source after installing this build. You can read and understand more about it through a post from Hari Pulapaka!

From this build onwards, Windows Insiders will get their first look at the emoji support for -Emoji 12.1 and 13.0! You’ll find over 200 new glyphs to Windows with the current update including the bubble tea, a smiling face with tears, a ninja, and much more.

In the context of the same, you would be able to see a gender-neutral emoji design, which you can now choose alongside the corresponding male or female design in the emoji panel and touch keyboard – 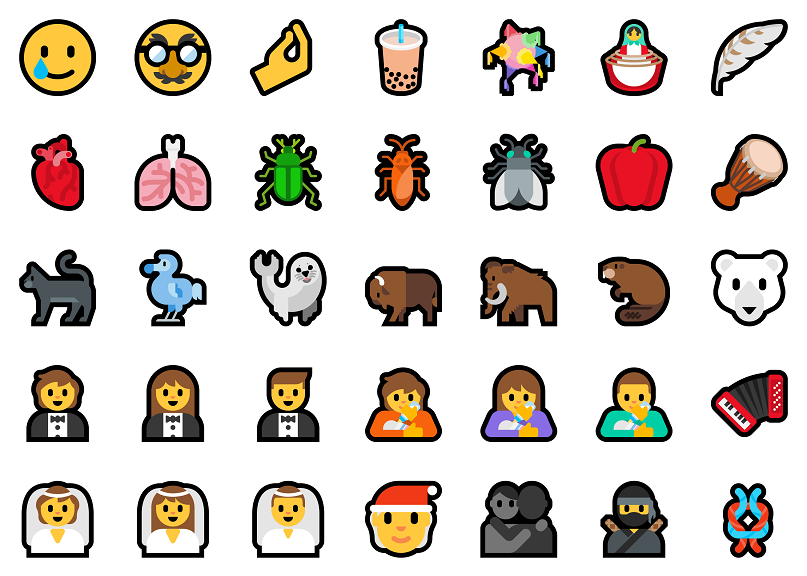 Users will find certain tweaks in the existing emoji that polishes the cross-platform consistency:

You can use the shortcut Windows Key + (.) Period + Semicolon (;) to bring up the emoji panel and find all the changes.

Essentially, there have been several improvements in the emoji search terms based on user feedback. If you still don’t get the expected emoji when you search for it even after the current build, you can file feedback for the same in the Feedback Hub under Input and Language > Emoji panel. In doing so, you’re suggested to input the words you used, and which emoji you were expecting to show up.

Following are the known issues in the current patch