Zoo Train is a children’s Windows 8 app designed in such a way to make learning exercises with fun. It consists of five games that are based on different concepts and a rewarding scheme when the user completes the given task. Zoo Train App has won the Parent’s Choice award and has been famous since then. The app comes at a price of dollar and a half. Using Zoo Train Windows 8 App Pre-Schoolers Kids can Learn with Fun.
Talking about the interface it has been constructed keeping in view the understanding of children. The controls are pretty simple and you just have to tap at every occasion. The concept of train makes it more interesting for children to start with. Zoo Train app can be downloaded from the Windows store and installed on your windows device. In the home screen of your device now you can click on the icon of the game to launch it and then you are taken to the main interface of the game. A screenshot of the same has been shown below. 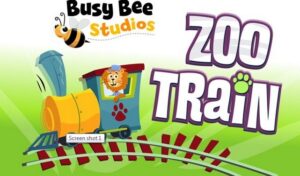 You can have the access to Zoo Train app from the link provided at the last of this article.

The above screenshot merely shows the logo of the app. The games that are present in the app can be broadly categorized under the following parts. A little description of the parts is mentioned below:

Matching Letters: In this game, as the train is running you are shown some of the letters in a series and a letter at the top of that series. You just have to identify the word in the series that resemble the top word and click on it to match the letter.

Making Words: In this game, you are given a series again and you have to complete the word to get the picture of the thing displayed on your screen to collect the reward. The words that are given are simple and the difficulty level increases with the correct answers.

Assembling and Matching Shapes: In this exercise, the kids are required to assemble the pieces of a pattern and arrange them in order to form something meaningful. The pattern can be of anything from simple flower to a toy. When you correctly match the shapes the overall pattern is then shown beside.

Listen To Songs: There is a whistle train that you can use to play a song while you are playing. This makes the game more interesting as you keep yourself attached to the game.

Track Shapes And Patterns: There are patterns of the tracks that are presented to you in disassembled form and then you have to align them correctly to form the track on which the train can run. Once you have formed the track you can run the train on this particular track and have fun.

Reward Section: This is the reason why kids might play more. There are a whole lot of stickers of different types that are given to you on completing a game. You can collect as many of them and store them under your rewards.

These are the only things that one needs to know to get along with this app.

Zoo Train is a very nice Windows 8 app for kids above the age of three and a very good way to make them learn and play simultaneously. Although some more games in this app would have made it better the app is still one can use to keep their younger ones busy. Overall, Zoo Train is a good app for kids and you should have this app if there are kids in your house.