There are many users nowadays who are using the Microsoft Surface Pro tablets which are all running on Windows 8 and the Windows 8 Pro Operating System. They want to get the same feel on the tablet also as they get on Desktop. For this moving the taskbar to the left of the screen is the best idea which gives a better controlling experience with the thumb. This use of Taskbar in the landscape mode also saves a lot of space, but using it in portrait mode is a problem. In the portrait mode, the taskbar takes a lot of space, which significantly destroys the experience of working on a tablet.

The portrait mode is considered the best when one is surfing the internet, or reading the eBooks or editing the documents. If you are interested and are always using software to read eBooks in portrait mode on desktops, then the idea of auto-hiding the taskbar will be quite appealing to you. While there is custom the setting to auto hide the taskbar, but, it hides it in both the portrait and the landscape mode. But for only hiding it in the portrait mode a third party application is required.

Downloading, installing, and using this software is much easier than said. To download it, visit the page “Download Surface Taskbar”. This will download the zip file. Extract it. After the successful extraction of the zip file, run the program. After the complete installation, run the program and you can change the settings according to your needs. 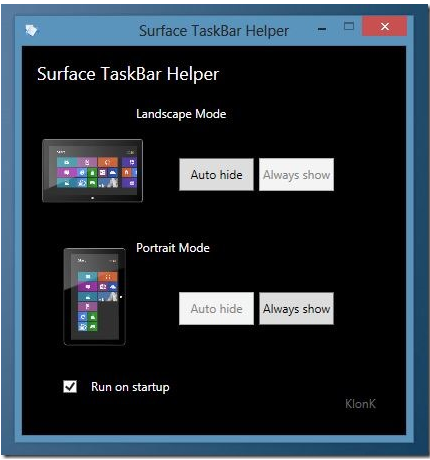