How to Avoid Open or Public WiFi Security Risks – In recent times, free WiFi is comfortably approachable in even miniature public places. It is good for the avid users, but there are certain precautions that require keeping in mind before connecting to public WiFi hotspot otherwise you may risk giving out too much information. Hence, we will go through remarkable and relevant tips to be Careful While Connecting to Public WiFi Network underneath.

How to Avoid Open or Public WiFi Security Risks

Virtual Private Network alias VPN is a flawless and thorough security system furthermore a highly rated tool for the users who frequently connect to a public hotspot. This tool facilitates a proficient approach in order to protect  IP address and connection. Paid VPN services also exist in the outlets. In addition, they also render customers with assorted applications for diverse Smartphones OS.

If you want a reasonable opportunity Hotspot shield is a free VPN that presents impeccable protection for your phone. 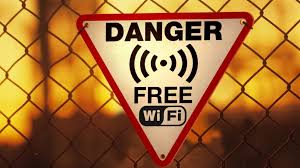 One should withdraw carry banking operations into effect on the open hotspot as you might transmit malware opportunity to obtain credentials.

It is evermore better to sign in public WiFi by dealing with a guest account. The guest account is an emphatic alternative on Windows 10 worth enabling via the Users accounts link settled in the control panel console.

One can carry out two-factor authentication that will render you with an additional layer of security in order to keep you safe while running WiFi  and also while browsing the web.

If you hold Windows 10 phone Encryption such as Bit locker encryption is an intelligent tool to sustain files, additionally vital data entirely safe. Hence, you must discover whether your smartphone is capable of running Bitlocker.

To have your Windows 10 phone thoroughly secure, it is an appreciable exercise to update the antivirus and antispyware to the advanced edition.

This can be carried out in mere 3 steps on Windows 10 phone through All settings followed by update & security thereafter tapping on Windows update successively. Upon performing these actions, the only task you require is a execute a tap on Check for Windows update.

Firewall is a default zone of protection on Windows 10 Phone. To authenticate whether the firewall is functioning accurately on your Windows 10 phone tap on Start and type windows firewall and then strike Enter. You can now bring firewall into operation by turning it on.