Microsoft has announced that BattlEye Windows 10 1903 Issue Got Fixed externally by the Game company. They have included in the “Known issue” list for the version May 2019 update. As per the info there “When launching a game that uses an older, impacted version of BattlEye anti-cheat software on a device running Windows 10, version 1903, the device may experience a system crash”.

So Windows 10 1903 users who met Older versions of BattlEye anti-cheat software incompatible issue have good news.  Redmondians applied a compatibility hold on the devices with the impacted versions of BattlEye software. Now, since the issue is resolved the hold has been removed. 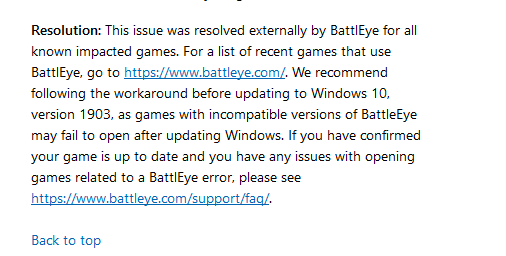 BattlEye Windows 10 1903 Issue got Fixed by the Gaming company

According to the announcement from Microsoft –

Resolution: This issue was resolved externally by BattlEye for all known impacted games. For a list of recent games that use BattlEye, go to https://www.battleye.com/. We recommend following the workaround before updating to Windows 10, version 1903, as games with incompatible versions of BattleEye may fail to open after updating Windows. If you have confirmed your game is up to date and you have any issues with opening games related to a BattlEye error, please see https://www.battleye.com/support/faq/.