Microsoft rolled out SSU (Servicing Stack Update) KB4465477 for Windows 10 October 2018 update version 2018. The patch will improve the stability, reliability, security, and performance of the build. You have got KB4464330 for Windows 10 1809 yesterday to fix deleting files issue.

You can download KB4465477 Windows 10 1809 SSU (Servicing Stack Update) MSU file from Microsoft Update Catalog. Although you will receive the patch itself through Windows update on or after October 9, 2018. 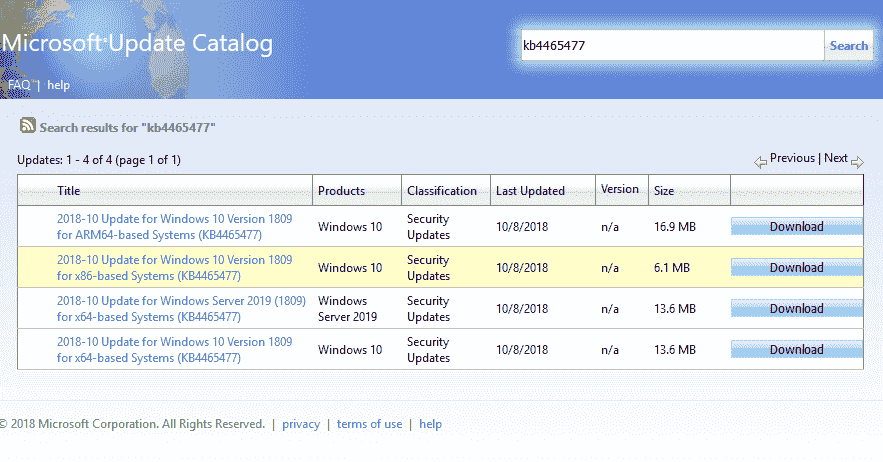 The SSU KB4465477 Windows 10 1809 is the code that installs other operating system updates. Moreover, the update includes the component-based servicing stack that holds multiple elements of Windows deployment, for example,  SFC and DISM. This also changes the Windows features or roles and repairing components through tools.

Like others Servicing stack update (SSU) KB4465477 is prerequisite that helps the system to reliably installing the most recent quality and feature updates.

This SSU patch will be automatically downloaded and installed but you can receive the same manually.

Click on Windows button from the taskbar, type Settings and then press Enter.

Once the Settings program appears on the screen, select Update & Security.

Move to the right pane on the subsequent page and click on Check for updates.

You don’t need to restart the PC after downloading to apply the update.

To download the Stand-alone package of Servicing stack update, navigate to the Microsoft Update Catalog website and match you System bit with the file. Now click on the Download button from the extreme left of the page.

A separate Window will open with a title- 2018-10 Update for Windows 10 Version 1809 for ARM64-based Systems. Click on the link under this and that’s all.