It so happens that a favorite music video or a movie that you have downloaded from the internet on your PC plays without any problem. You decide to watch it later on your mobile phone and transfer it to your cell. It is then very annoying to realize then that the particular format of the video isn’t supported by your cell phone. In order to help you out with such problems, there is a very helpful utility by the ‘Ellora Assets corporation’ known as the ‘Freemake video converter’. Let’s have a look at the features of this video converter:- 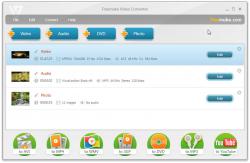 Freemake file size is 27.8 MB and it is a freeware by the ‘Ellora Assets Corporation’. It requires Win 8/7/vista /XP as OS requirements.

Note – While you download the freeware and install it the setup program might include installment options by third party sites. Be careful to opt-out from such advertising software that might change your browser toolbar or homepage.