The smaller, the better. This seems to be the all weather mantra of the computing and electronics industry. Indeed, we have come a long long way from the 1940s when the earliest computers like the ENIAC occupied a whole room.The latest addition to this transition to the micro sizes is the INTEL’s newest NUC or the ‘NEXT UNIT OF COMPUTING’. Meant strictly for the DIY freaks (read DO IT YOURSELF), Intel recently announced and presented at the London platinum summit it’s the first generation NUC. The NUC’s primary component is a custom form factor motherboard which comes with and fits into a 4″x4″x2″ chassis. This NUC works with a dual-core ULV Ivy Bridge CPU and is supplied with the Core i3 3217 U microprocessor chip (17 W TDP, 1.8G Hz frequency, turbo less, HD 4000 graphics which run at a frequency of 350 MHz – 1.05 GHz).

Now talking about the BY version, it is similar to the IYE except for the fact that it has only one HDMI PORT, the ETHERNET is absent albeit, THUNDERBOLT is present and the chassis comes in BLACK WITH A RED TOP.

Thus the primary difference here comes out to be the Ethernet and the thunderbolt. INTEL has aimed to put the product on sale by December this year. The NUC will be available on AMAZON, and the tentative pricing is around $300 – 320. Though one thing that is to be kept in mind while buying is that the memory, PCIe cards, and the power cords have to be bought separately. You will need to buy a C6 type connector that fits into the power adaptor’s C5 type connector. The original kit will also include a VESA mounting bracket.

The NUC is meant for quick assembly and operation if you have access to a VISUAL DISPLAY UNIT. While demonstrating the product at the LONDON PLATINUM SUMMIT, INTEL spokesperson Mr.Dan Snyder said that the product is custom made for single tasks like media

center/home theater types or maybe gaming. It’s like a pocket machine, you can carry all around and get it working within minutes. Since the NUC’s USP is its easy transportability and installation, the assembly of the product is obviously a simple operation.

As you take the product out of the carton box, you hear the familiar Intel tune. That, of course, is a cute addition, an optical sensor that senses light and plays the tune. Once you have the black box (or the red top one…depending on the version you bought), simply unscrew all the four screws to get access to the motherboard. That’s the least you need to do to get the NUC working. You have an option of installing up to 2 8 GB DDR3 SO-DIMMs. There are two PCIe slots. The bottom one accepts only half-height cards. So you may install Wi-Fi there. The top slot takes in a full height card, Thus it serves as the slot for a mSATA drive. Talking about the Wi-Fi, the antenna pigtail for that is already routed to the concerned spot in the chassis. You can spot the THUNDERBOLT controller at the TOP RIGHT HAND CORNER of the motherboard.

INTEL ships in its mSATA SSD 520 (180 GB) with the NUC. It is a SandForce based mSATA drive which uses 25 nm MLC NAND. This being a SandForce controller, it does not require an External DRAM which guarantees a better performance on mSATA form factor. There is total of 4 IC packages on the SATA 520, the controller and 3x64GB 25nm MLC NAND devices.

Unscrew the motherboard’s four corners and it completely separates from the chassis box. Turn the motherboard upside down and you will see the heatsink and the cooler fa covering the QS77 CHIPSET and the core i3CPU. The fan is barely audible at a distance of 18″ inches from the chassis. The chassis top gets quite warm (around 48.7C) when the CPU works at full capacity. While running the x264 HD test, the 65W power adapter pulls 10W for the system when idle and peak power consumption centers around 19.3 W.

As far as the performance comparison is concerned, the NUC works on the lines of a 17 W mobile IvyBridge CPU. The following graphic gives you an idea of how the NUC fares in comparison to a conventional 65W i3 based desktop. 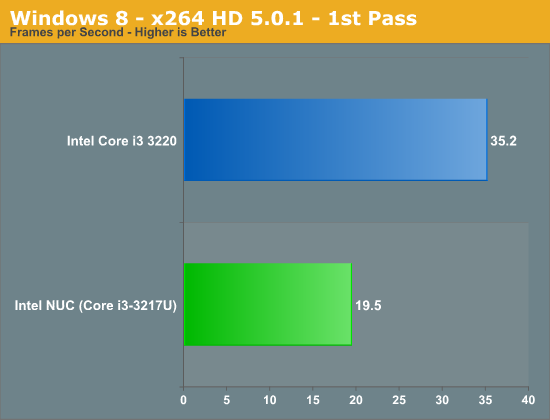 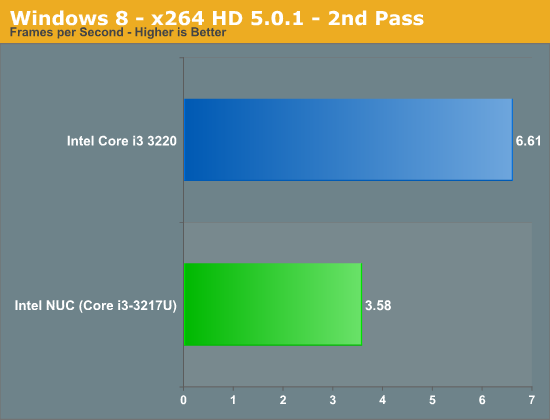 With the first generation of the NUC INTEL has set a good ground for future, improvised versions. Obviously, you will find the NUC attractive if your job requires good form factor. The future might see more, and multiple parts integrated into this pint sized box where the NUC gives you the exact feel of a full blown PC, just in a smaller size. I believe it has set a competitive and innovative trend in the PC market. In any case, it’s a win-win situation for computer geeks.