Microsoft has updated the release note of Windows 10 Insider Preview Build 17763 dated 30/10. They are possibly texting the bug fix on Windows Insider computers to push the same to the original version. 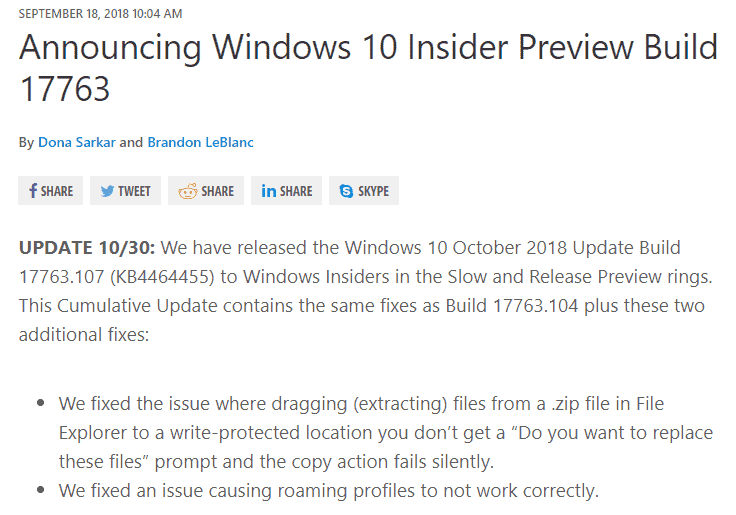 Windows 10 version 1809 arrived with multiple Bugs, Problems, Errors.  Deleted User Files,  What needs your attention warning were some of them, The update was paused because a lot of users were complaining that their data were wiped out.  Microsoft issued phone numbers to help them out and investigated the reason as well. Later they released the cumulative update KB4464330 to fix this issue. Some users complained Notifications Missing in Action Center on this version but after the same patch the issue settled down.

But as the time passed some more bugs were troubling Windows 10 version 1809 users. Zip File issue is one of them as Microsoft Answer forum is addressing in this update. When Extracting a .zip file in write protected location you get a prompt. Windows 10 1809 “Do you want to replace these files” is unavailable moreover copy action fails.

Windows 10 October 2018 Update Build 17763.107 has fixed the unzip problem. You are able to extract the .zip file as usual after installing this update. You can see the prompt – Do you want to replace these files – while extraction And the unzipped content stored successfully. The bug fix will save you from data loss due to Windows 10 version 1809.

Another issue that Microsoft fixed in this build is roaming profiles to not work correctly.