Here you will find entire Narrator Keyboard Shortcuts in Windows 10. When you enable this Ease of access tool, it reads the elements pursuing your cursor. Microsoft wants to make it easier for you to learn and use Narrator, so the company provides a new Standard keyboard layout for Narrator via Insider build 17692.

Narrator Keyboard Shortcuts / Hotkeys will be effective after next big release of Windows 10. Moreover, these will be useful for the users who are currently running their system with Windows Insider. 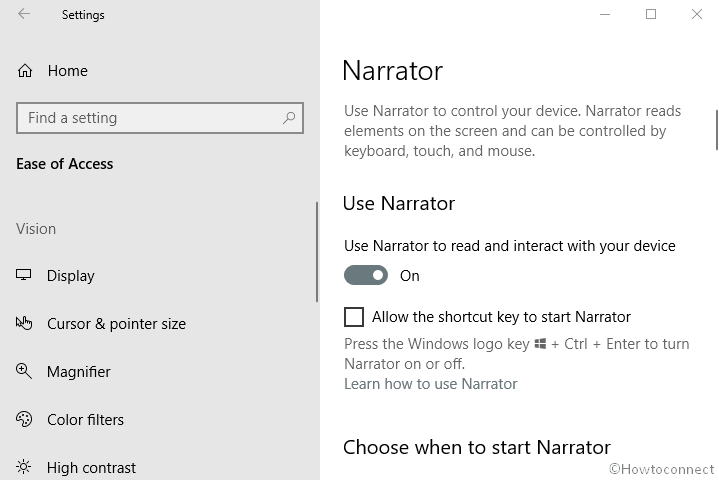 Narrator lets you use either the Caps lock or Insert keys as your modifier key. Windows 10 includes Change View commands mapped to the Narrator key + Page up and Page down keys. This is a new hotkey of this Ease of access tool. You can use Change View by pressing Narrator key + Control + Up arrow and Down arrow. Move Next and Move Previous is as usual.

You will use new Scan Mode’s Primary and Secondary Action commands. You have the ability to execute Primary Action by pressing Enter or Spacebar. In addition, complete Secondary Action by simply adding a Shift key to each of those keys (Shift + Enter or Shift + Spacebar). You’ll see this change regardless of the keyboard layout you select.

Narrator’s page, paragraph, line, word and character commands are available with modifications in Standard keyboard layout. In addition, many of the commands have moved to be more mnemonic. Some also come with alignment to keystrokes that are more familiar to screen reader users.

You can use the numeric keypad to issue Narrator commands.

Several of Narrator’s keyboard commands for moving to Links, Headings, and Tables are deprecated from the Standard keyboard layout. These also function in Scan Mode and Change View. You will notice deprecated ”Move to last item in containing area” command.

To keep your keyboard layout the same, go to Settings > Ease of Access > Narrator, and choose the Legacy layout. This will revert Narrator to the experience that shipped in the Windows April 2018 update Version 1803. Note that new Narrator commands in this release will not be available in the Legacy keyboard layout if keystrokes for legacy commands conflict with those used in our new Narrator features.

When you upgrade to this version of Windows and turn on Narrator, a dialog will pop up that gives you some information about the changes. Check the box next to “Do not show this again” if you don’t want to see it again.

Caps lock and Insert keys work as your Narrator key. If you’re using a 106 Japanese keyboard, then the NonConvert and Insert keys will replace it. You might have in your mind that earlier the Control and Alt keys were used as Narrator’s modifier keys.

Narrator settings include new heading “Choose keyboard settings.” You can get to it in Scan Mode by using the H key to move to the heading.

This setting allows you to choose your Narrator keyboard layout.  If you want to return to the keyboard layout prior to Windows 10 April 2018 update, select the Legacy layout.

This setting allows you to determine the keys used as Narrator’s modifier key. The following options are available:

If you’re using a 106 Japanese keyboard, the settings are:

Note: If you choose the Legacy keyboard layout, this setting won’t be available. The Caps lock key works and you can use Ctrl + Alt Narrator key modifier for Japanese keyboard when in the Legacy.

The next few sections tell you more about how Narrator’s Standard keyboard layout differs from the previous (now called Legacy). We’ll review the most common keys used in Narrator throughout these sections.

Note: When describing keystrokes for commands in the tables throughout this document, we’ll refer to the Narrator key simply as Narrator. You’ll also notice this in the Narrator + F1 dialog that shows all of Narrator’s commands.

Press Narrator key + 1 to turn on input learning. From here, you can try keys on the keyboard to learn their new functions easily.

The following changes have been made to control Narrator’s speech settings:

Here are the new keystrokes for reading tables when you’re not using scan mode:

These hotkeys will work whether scan mode is on or off:

You can select content while in scan mode and copy it to the Windows clipboard. The following Narrator Keyboard Shortcuts / Hotkeys in Windows 10 will work while you’re using scan mode:

That’s all from Narrator Keyboard Shortcuts / Hotkeys in Windows 10