The Samsung has revealed two new features in the latest version of Galaxy S4 smartphone. These features are called S Translator and Optical Reader.

What is S Translator ?

While you get a new email or SMS in other foreign characters, it is not simple to be read by you. To provide language translation solution to read any foreign character or language, Samsung has introduced an integrated S Translator feature on the Galaxy S4 device. It is really a smaller version of Google Translate service. It lets you to translate language in text or in the spoken words in your Galaxy S4.  It translates about 9 different languages to English in few seconds. The S Translator supports many foreign languages as Brazilian Portuguese, English (UK), English (US), French, German, Italian, Japanese, Korean, Chinese and Spanish.

Enable Galaxy S4 to Easy Mode for the beginner 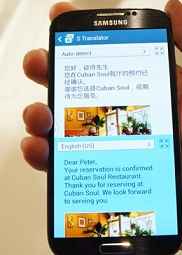 The S Translator will help you in the conditions:

What is Optical Reader ?

At last, I recommend you to play the below given videos to understand how above both features work on your galaxy S4 device.