Windows 10 Build 18932 comes out to the Insiders in the fast ring carrying a bunch of fixes, changes along with some remarkable known issue. The build includes Eye Control and Accessibility Enhancements which covers a few most requested features like – Drag-and-drop, Pause, and more. Additionally, after installing this update, you will surprise seeing that the Narrator will now start reading webpages and emails by itself. Along with these changes, you will observe that the Magnifier user interface now works accompanied a dark theme and text sizing options.

Besides, the tech giant brings additional new features to the Phone app. This comprises the ability to one-touch tap and integration with Notifications. Being into the Skip Ahead ring, you’re able to straightaway get Build 18932 20H1 via Windows Update. For this, simply go to the built-in Windows Settings app and explore the Update & Security category. Subsequently, click on the ‘Check for updates’ button and let download the build 18932 on your machine.

Here is the Changelog –

Microsoft is continuously trying to enhance and upgrade the Eye Control based features. With this build, you will notice the enhancements in the following fields –

Drag-and-drop – This is one of the most requisite features brought in to operation in Eye Control. It mainly performs mouse drag-and-drop function which is very helpful features for the users. To make enable this feature, just go to the settings screen of Eye control and activate it. The specific mouse control tool lets you drag the mouse. This feature also provides you the ability to clicks and drags with Shift and Ctrl modifier hotkey. 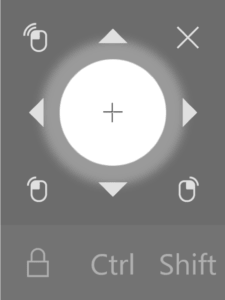 Pause – Microsoft team also made changes to the pause experience. If you hit the pause button, the launchpad will entirely conceal. However, on dismissing, the launchpad starts to appear again. This lets you an experience of viewing full-screen content without any obstruction. In a similar way, it also provides “eye gaze enabled applications” which is advantageous while executing the newly started Eye first applications. Moreover, the eye gaze enabled applications can be used without triggering Eye Control features.

Switch support – Earlier, Dwell was used for clicking a button. Dwelling, it is the process of fixing your eyes on part of the screen and holding your eyes there for a certain amount of time. In this build, the tech giant has added another activation method in which dwell is used to select the target, but clicking a button is done with switch. Besides, at the present time, users follow the devices which support joysticks or having this feature.

Settings – In this release, the Redmond team has updated settings to allow you to manage more Eye Control features. This comprises allowing of a few new features and more fine control of the numeric values that transform how sensitive the system is for the eye movements. Along with, it allows for a more customized and straightforward experience for your Eye Control experience. 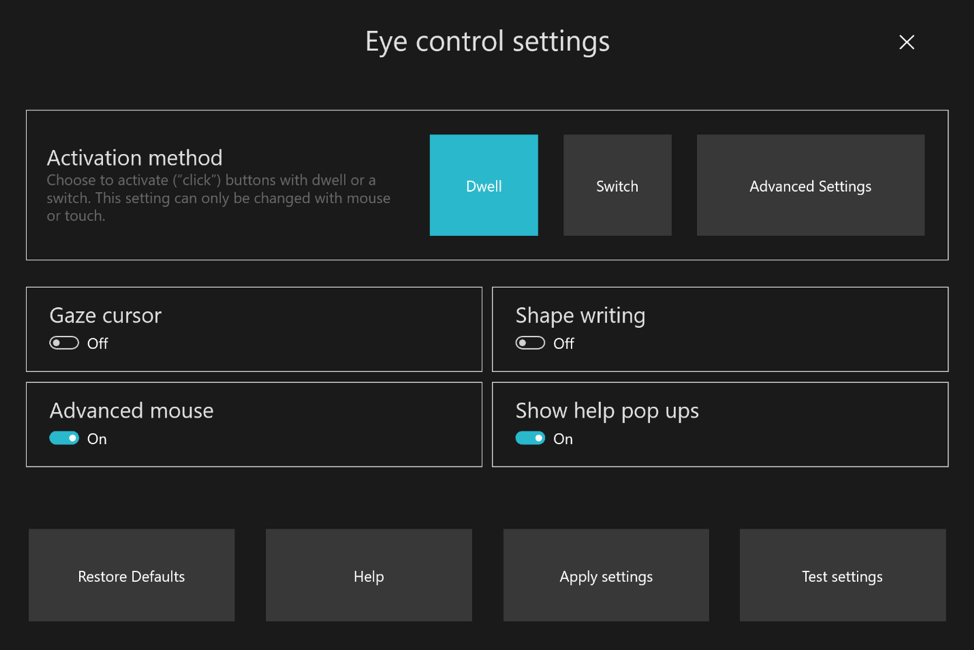 Other Accessibility Improvements with Windows 10 Build 18932

The narrator will now automatically start reading webpages and emails – With this Windows 10 Build 18932, you will listen to the most vital content fastly. When the narrator gets loaded, it starts reading webpages by itself. The narrator will start reading at the main event, if there is one, or will fall back to a reasonable paragraph. Besides, it will also start automatically reading emails when you open it in Outlook and the inbox Mail applications. You are able to give feedback if you find such experiences that aren’t working well.

The Magnifier UI now works with a dark theme and text sizing options – If you see the below images, you might know how the magnifier user interface works in this release. Here the upper image is in Light theme and defaults text size. Whereas the lower one is in Dark theme and the text is sized at 125%. 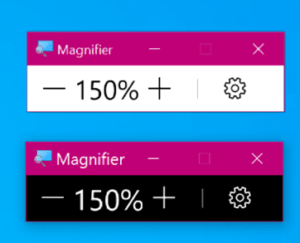 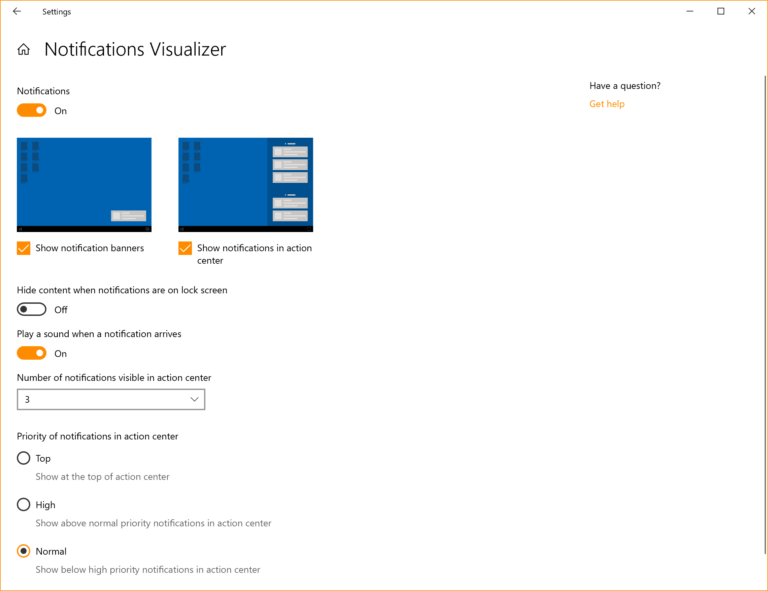 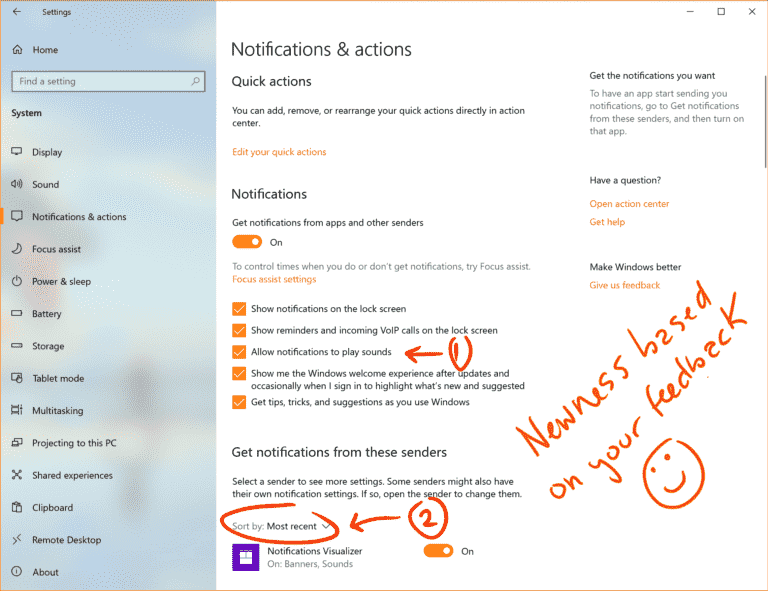 Microsoft uncovered an additional feature to the Phone screen for insiders only. It comprises the ability to one-touch tap and integration with notifications. You can check out these features from the below section –

Enabling touch functionality – With this additional new features, now you have the ability to communicate with your phone display using long press and one-touch tap. This is a very straightforward feature which lets you open apps, select items, and more in a convenient manner. It also allows you to click on links directly on your touch-enabled PC. 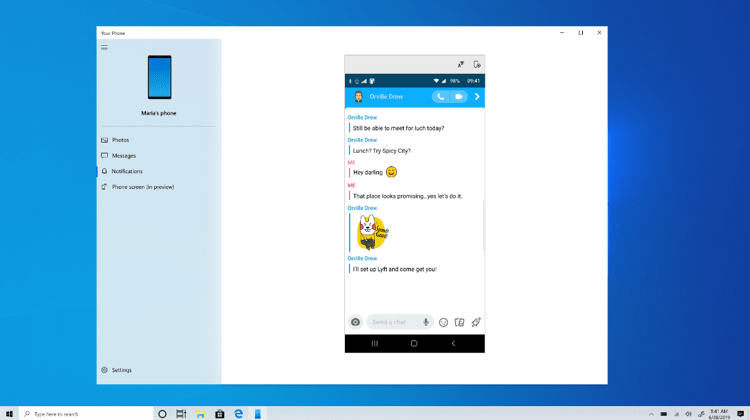 Your Phone Notifications available to all users – With the version 1803 or the newer, the notification feature in the Your Phone app is now constantly rolling out to all the Win10 users. Here you need to Keep a lookout as it may take a few time to display within your Phone app.

These all features will gradually be allocated to Insiders on builds 1903 or higher. Therefore, it may take a few days to be available.