Windows 10 Insider Build 18305 (19H1) arrives in fast ring level with several remarkable changes and features. Simple Start layout, Sandbox, Windows Security app, Clipboard history, a new way to sign-in, Settings Homepage are the important point of this update on which Microsoft worked. However, a few known issues are here but Windows insider team is active to resolve them.

You will receive Windows 10 Insider Build 18305 (19H1) automatically, but if you haven’t installed then navigate to Update & security and click on “Check for updates”. Microsoft warns that this build may have certain bugs that can cause problems for you as this is the early stage of development. If so with you then switch to the slow ring level. 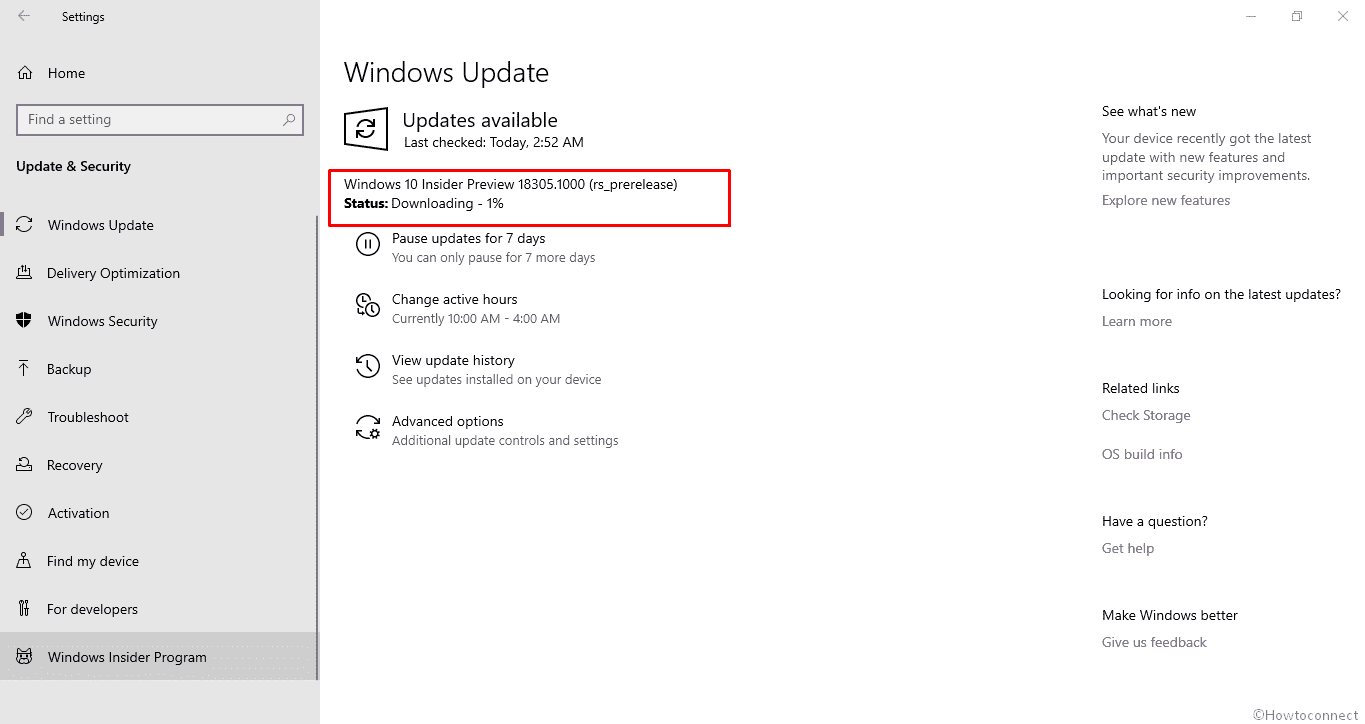 Windows 10 Insider Build 18305 (19H1) comes with a comprehensible default Start layout for new devices,  user accounts, and clean install. Now this will have sleek single column design including reduced top-level tiles. The same will be also viewable for the IT admins, commercial and education customers.

The previous build provided features to uninstall additional inbox apps and unpin folders and groups from the Start menu. The new layout will improve your “Start menu” experience in the future release of Windows 10. 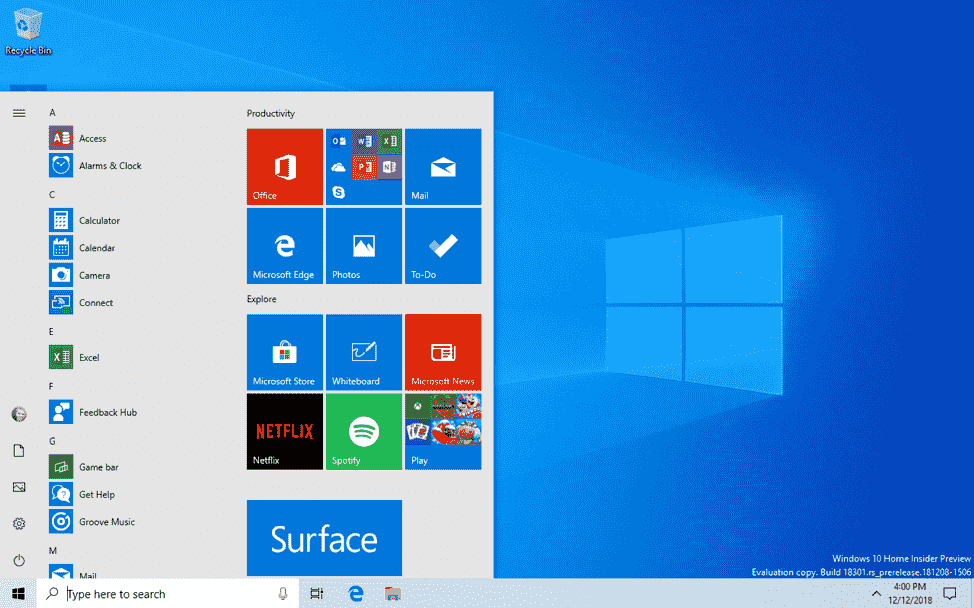 Windows Sandbox is a desktop environment for securely the currently active apps in isolation.

After you have downloaded an executable file, you commonly afraid to run it. Furthermore, you require a clean installation of Windows 10, you generally don’t want to set up a virtual machine.

Hence, Microsoft brings Windows Sandbox means an isolated desktop environment allowing you to run untrusted software. The process cannot affect your host even the file is harmful. When you will close the Windows Sandbox the software including all of its files and state are removed forever.

Windows Sandbox has the following properties –

To set up the Sandbox, navigate to “Settings => Apps => Apps & Features => Programs and Features => Turn Windows Features on or off”. Finally, choose Enable Windows Sandbox.

To open this tool, open the Start search, type Windows Sandbox and then select it. 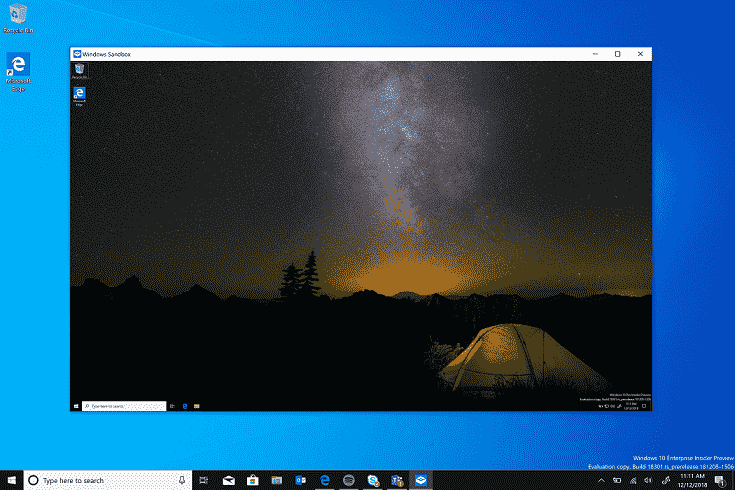 New Protection History experience – The Redmond has totally revamped the Protection history experience in Windows Security. This will give more information and easier to understand stuff about threats and available actions. Windows 10 Insider Build 18305 (19H1) includes Controlled folder access blocks to history. Moreover, it provides the blocks which are made via organizational configuration of Attack Surface Reduction Rules. If you run the Windows Defender Offline scan, you will have the ability to see the detections in your history.  Furthermore, you will view any pending recommendations (red or yellow states) in the list.

Symbols and Kaomoji are available

Kaomoji is Translated from Japanese and indicates face characters. Using this you are able to create faces using only text.

You will find sections for symbols, currency, math, Latin, and language, geometric, punctuation. When you pick your most often used symbols, then the recently “used” tab will populate with them, so it will be even simpler to choose them subsequently.

Presently, only the emoji field supports type to search.

Microsoft brought this feature for Chinese (Simplified) while RS5 development and delivered to Insiders across all languages with Windows 10 Build 18252 Fast ring. In the current build, they have updated the kaomoji including adding ¯\_(?)_/¯.

Clipboard history allows you to save numerous items to use later. After Introducing during Windows 10 Insider Preview Build 17666, users give great feedback one of the things we heard most is that the User Interface wasn’t compact enough. A large space was used for each entry even if it was just a small text fragment. Windows 10 insider team originally tried to show bigger entries so there was space to display an image preview well. But 90% of items in the clipboard history were text. The team is now optimizing the design for text snippets They have reduced the height of each entry and provide you access to more entries without requiring scroll the view. 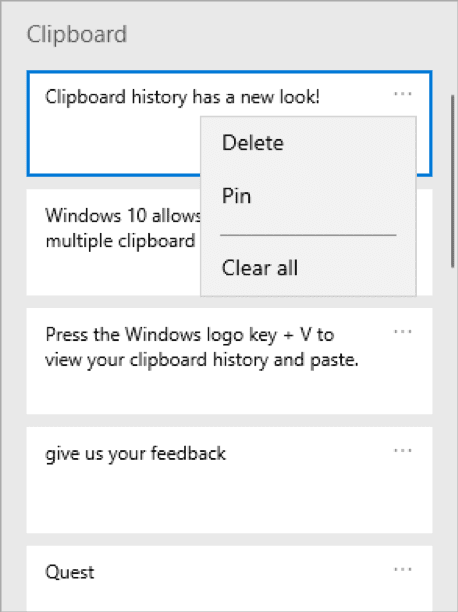 Hope you like the change we made! Copy some text and press Windows logo key + V to check out the updated design.

Windows 10 Insider Build 18305 (19H1) tries to eliminate passwords and keep your accounts safe with another cool feature. So they roll out support to enter and log in to Windows 10 with only a phone number account, without having to create, or deal with the annoyance of a password. When you have integrated a Microsoft account with your phone number, you can type a text message code to setup an account on Windows 10. After that, you are able to use Windows Hello Face, Fingerprint, or a PIN to sign in. 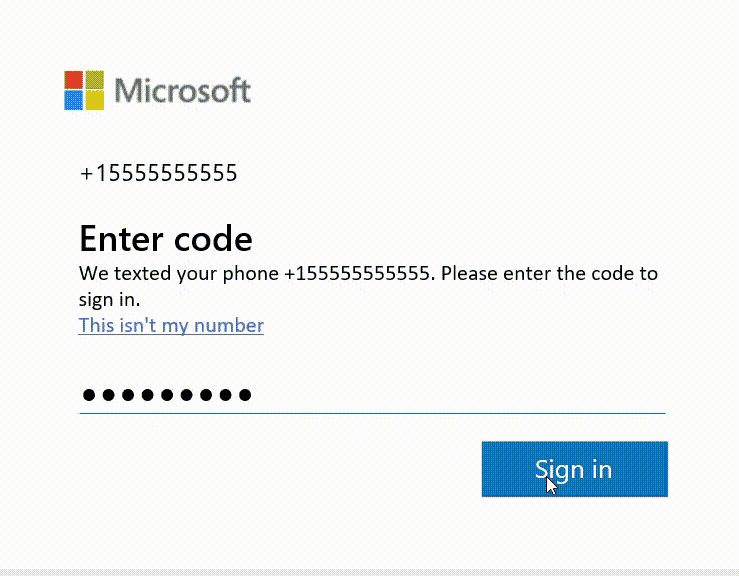 Now that you’ve created a password-less phone number account, by following the instructions –

Important – This feature is at present only available for Insiders on Home edition.

Microsoft brings up a revamped Windows Hello PIN reset feature with the look and feel identical to signing in on the web. Click on I forgot my PIN when logging in and experience.

Important – This feature is currently only for Insiders on Home version.

Windows 10 automatically fix some critical problems on your device. For instance, it restores default settings for critical services, adjusts feature settings to compete with the hardware configuration or make other specific changes. The Critical troubleshooting occurs automatically and can’t be disabled. 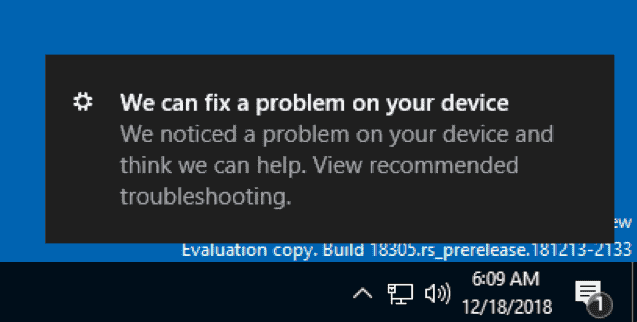 Windows 10 also provides recommend troubleshooting for other issues that aren’t critical to normal Windows operation. But the setting might be impacting your experience. You should disable this feature because sometimes it causes an app or feature to crash unexpectedly until an update is available. However, Microsoft will help you to choose to run the troubleshooter or ignore it. You can also change this from  Start => Settings => Privacy => Diagnostics & Feedback.

You will view this notification when there is a recommended troubleshooter available:

After clicking it, you’ll see this screen, where you can choose whether or not to run the feature. 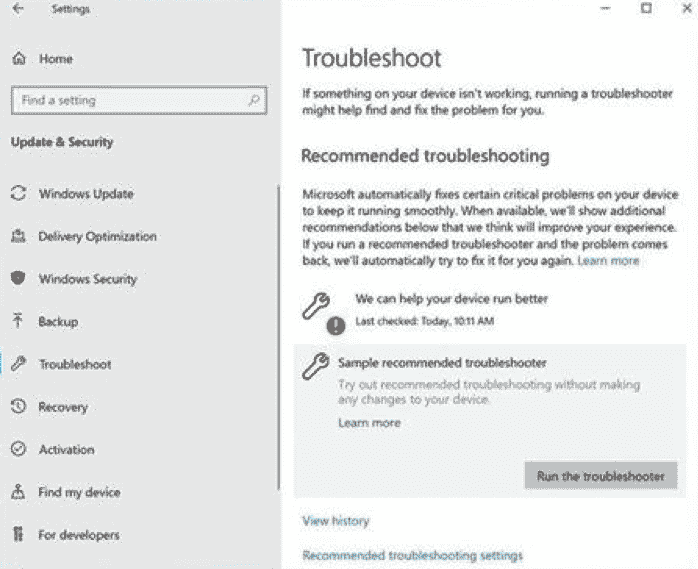 ARSO in Windows 10 Enterprises is a feature that automatically signs-in a user after an update to finish setting up and then locks the PC.

1) BitLocker is enabled and is not suspended during the upgrade.
2) TPM 2.0
3) SecureBoot

To determine if your device is capable of using ARSO go to Settings => Accounts => Sign-in options => Privacy:

If the toggle is turned On and is not greyed out, then it competes with the security requirements and is enabled by default.

When it is grayed out and Enabled, this indicates that your IT Admin has explicitly enabled ARSO for you, regardless of the security requirements.

If the toggle is grayed out and switched off, this means that you do not fulfill the requirements for Enterprise ARSO. Or your IT Admin has explicitly disabled ARSO for you, in spite of the security requirements.

You can make your preferred tab through Options => Set default tab. 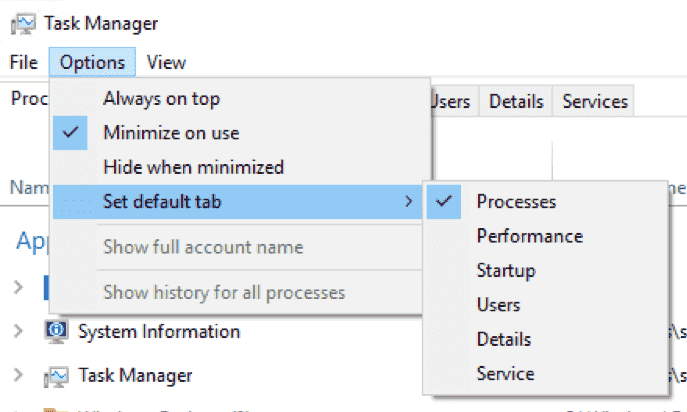 Microsoft brought up a new way to finish Windows setup and quickly access most frequently used settings. The Settings home page now includes a header at the uppermost part that allows you to take quick action for signing in and managing your Microsoft account. It also provides you an easy to glance at system status, for example, when updates are available. 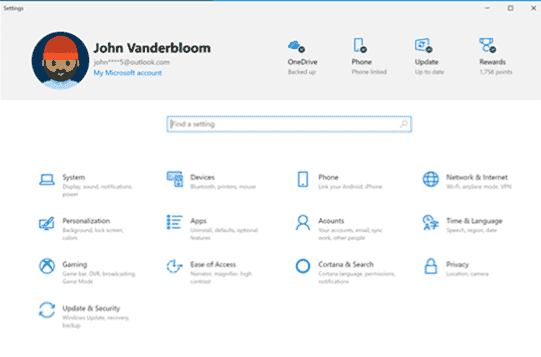 With Windows 10 Build 18272, Microsoft referred certain users may get a few minor changes to File Explorer. So default downloads folder sorting was the first part that got changes. Now they are trying to set the default date format in File Explorer.

The new format of File Explorer simplifies the Date modified column and gives consistency with other views that you view throughout the Operating system, apps, and on the web.

Microsoft started re-rolling out the shadows work that at first came in light in Build 17711. The current build brings Shadows back.

Microsoft is rolling out IME once more to Insiders. The latest version of the same includes enhanced key customization options and better candidate window reliability.

Introducing the Office app for Windows 10

Insiders get their first glimpse of the new Office app this month., Microsoft provides a simple design to help them get the most out of it and get back into their work quickly. This application is based on the redesigned Office.com,

You will find a great starting point in the Office that helps easily and quickly get all your files in one place. It knows to connect you to the Office rich clients if they are installed on your computer or it will send you to the web version of Office if they’re not. Advanced users will also admire the ability to customize the app by integrating other line of business applications that use Azure Active Directory.. This aims to apply corporate branding to the app.

You can go to detail – Office app for Windows 10

Important – You may see the new Office icons in the screenshot.

Get more done with Cortana and Microsoft To-Do

The task will be located centrally in your Microsoft To-Do app. Use the application anywhere on your Android or iPhone, with Cortana, or on your Windows 10 PC. You have also the ability to access it from the web.

When you ask Cortana to add butter to your grocery list, it’ll display up on one of your Microsoft To-Do lists.

If you install any of the recent builds from the “Fast ring” and then switch to the “Slow ring” – optional content like enabling “developer mode” will fail. Hence, you need to remain in the Fast ring in order to add/install/enable optional content. And this is necessary because “optional content” will only install on builds approved for specific rings.