As users confronted with several serious issues, Microsoft discontinued the rollout of Windows 10 October 2018 Update, version 1809. The isolated reports of users missing files after updating were the main problem. This significant data loss of any user made the team put more precaution in pulling v1809 media across all channels. It includes IoT equivalents as well as Windows Server 2019. So, Microsoft identifies and fixes all the data loss issues in this Windows 10 October 2018 Update 1809 For Windows Insiders.

Instead of offering the update broadly, Microsoft is now carefully monitoring the feedback. And thus plans to roll out the updates slowly. However, this update will be available to those users only who will manually conduct a click on the “Check for updates” button in Windows Settings. In addition, the Microsoft Support and also their retail store customer personnel will help you out for free of charge. This re-release of Windows 10 October 2018 Update 1809 For Windows Insiders carries the updated version. 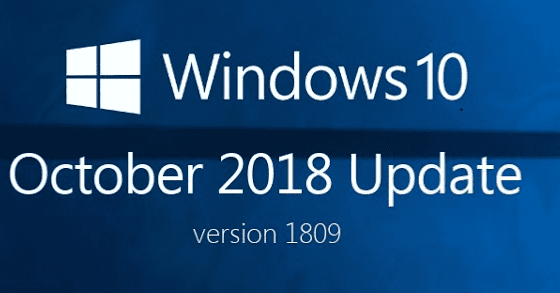 Before re-releasing the Windows 10 October 2018 Update 1809 For Windows Insiders, the engineering team carried out a thorough investigation. It was determined that a very small number of users lost files during the 1809 update. This happens if Known Folder Redirection (KFR) was previously turned on but the files continue to remain in the original “old” folder location vs being moved to the “new”, redirected location.

Basically, KFR is the process of redirecting the known folders of Windows. It includes folders such as Desktop, Documents, Pictures, Screenshots, Videos, Camera Roll, etc. from the default folder location, c:\users\username\<folder name>, to a new folder location.

In the Windows 10 April 2018 Update feedback, users with KFR complained an empty moreover extra copy of Known Folders on their device. And depending on their feedback, the team came out with a code in the October 2018 update. This code will eventually remove these duplicate as well as empty known folders.

That modification, combined with another change to the update construction sequence, resulted in the deletion of the original “old folder” locations moreover their content, leaving only the new “active folder” intact.

Known Issues and the Fixes

1. While using KFR, user redirects a known folder to a different “drive”. For instance, let us assume that you ran out of space on your C drive. So, you may prefer to save certain files from your primary folder. In this case, you add another drive to your system for these. You generate “E:\documents” and change the location of the files known folder from the original “old” location c:\users\username\documents to E:\documents.

2. The user configures one or more of their Known Folders such as “Desktop, Documents, Pictures, Screenshots, Camera Roll, Videos”, etc. to be redirected (KFR) to another folder on “OneDrive”. For instance, the user changed the location property of the documents folder from “c:\users\username\documents” to another folder. In this process, the system will prompt up with a message if they would like to move the files to the “new” location. If the files were not moved and the October 2018 Update is installed the actual “old folder” was deleted which comprises the files in that folder.

3. The older version of the OneDrive client and its settings turn on the Auto Save feature. This feature enabled KFR for the Pictures and/or Documents folders based on your preference. But this fails to move the existing files from the actual “old location” to the “new location”.

Microsoft investigated all the above-mentioned three scenarios and developed solutions to resolve them. Hence, the actual “old folder” location and its contents remain intact.

The team also rolled out some other fixes in the monthly update for those users who already have Windows 10 October 2018 Update. You can find more details on KB 4464330.

To provide help to the customers who are impacted by this issue, Microsoft Support is assisting them. The team will try to recover data for users who have confronted the data loss. Moreover, Microsoft retail stores support services are also offering the same level of support. However, the team cannot guarantee the outcome of any file recovery work. If you believe that you have missing files issue, kindly minimize the use of the affected device and contact the team right away. For more information, you can also refer to the “Windows 10 update history page” which Microsoft updates with the new info as soon as it is available.

To detect the issues in a better way, Microsoft enabled a new feature in the Windows Insider Feedback Hub. While filing “User Initiated Feedback”, you can provide an indication of an impact as well as the severity of the issue. Even when feedback volume is low, this will definitely allow them to better monitor the most impactful problems.

Microsoft will continue to closely observe all the related feedback and the updates. With the utmost vigilance, the team will diagnose data from Windows Insider community. They will move towards an official re-release of “Windows 10 October 2018 Update” once they are confirmed that there is no further adverse effect.

Microsoft is improvising their process and notification systems that you will definitely experience in Windows 10 October 2018 Update 1809 For Windows Insiders.