Microsoft has been launching the new versions of  Windows operating system from years now. Every version has its own merits and demerits. The latest version of Microsoft’s operating system is Windows 8.1. Still there are many users who are using Windows 8 and the previous versions of the operating systems. Everything on this earth carries its own pros and cons with it. The points that appear as advantage to some may become a disadvantage to others.  Windows 8.1 has been back with everyone’s favorite Start Screen with an improvement in the performance. It also provided the users’ wide range of customization to the PC’s. But to be friendly with Windows 8.1 is not that easy. It takes lot of time to work properly on it. And also it is quite difficult to get a track on the background updates of Windows Store apps.

There is news in the techno market that in the coming year Microsoft is going to launch another brand new version of Windows operating system which might be called as Windows 10. Now many would be in wonder that whether this coming version from Microsoft will stand up to their meets or not. Well that we leave up to the users to decide it. By now you must have understood that we are here into this topic to reveal you some important information about the new version of Microsoft’s operating system – Windows 9. Based on the techno based gossip we came to know about the launching period of the new operating system. We have also noted the survey of what everyone is expecting the price of Windows 9 to be and the features that the users are expecting to have in it. The information will definitely be updated as soon as we get to know more about it.

Myce.com had acquired an exposed file which holds the details of launching time of Windows 10. As per their file report it is estimated that the Preview version of the new operating system is planned to be launched by 2nd to 3rd Quarter of next year, i.e., 2015. The working of beta plans might have been changed with an entry of the new CEO, and poor working conditions of Windows 8 might also have been a reason for the change in beta plans.

ZDNet had recently declared that insider sources had confirmed them that Windows 10 is just few months away. This ensures that by April or June 2015 it will be released.

But as per the Verge report, they say that Windows 10 is programmed to be launched on September 30th where the preview of Windows 10 will be shown.

Lets’ see what will be the Windows 10 Features 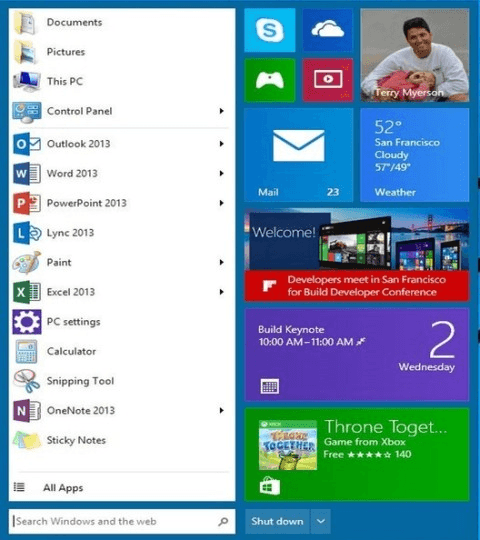 No Charms Bar in Windows 10!

And after this news, ZDNet had also claimed the news from the inside sources that the Charms Bar in Windows 10 is completely departed. All the Charms Bar menus items will be moved to title bars at the top of Modern UI apps in Windows 10, as per ZDNet.

Famous tech report has said that Microsoft will add virtual desktops for Windows 10. The main function of virtual desktop is that Windows 9 users will be able to make separate active desktops and can easily switch between them using a button on the taskbar. This feature will help the users to keep the desktop on Windows, not switching to other platforms.

Is Cortana is in Windows 10?

Neowin, the famous technology blog had revealed that Cortana had been seen running in with Microsoft’s new operating system. Cortana is the virtual assistant of Microsoft. It will be her introduction on Windows laptops, desktops and tablets with the launch of Windows 10. Now the reports say that If Cortana is in the Windows 9, than on the desktop it will occur as an app. When you will launch the app, a small window will be opened up where you can type or speak your question. While talking about Cortana, the CEO of Microsoft had recently sent an email to the employees stating that Windows Phone is just the beginning for Cortana’s life and also mentioned that Windows will experience her more in the near future.

Another report says that Windows 10 will be free of cost but on the condition that it will be without the desktop. Well, Microsoft policy have been in the same way over a time by which products of similar size or price are completely exempted by the licensing fee. Now how much Microsoft would charge for the desktop will be a debate in itself.