Microsoft has finally released Windows Defender Antimalware Version 4.18.1908.7. SFC /Scannow problem running since the middle of July this year is supposed to come to end after this update.

Even Redmondians has confirmed this bug in the Windows 10 versions and promised an improvement with the Defender Antimalware version 4.18.1908.7. The new update has now been installed via Windows Update or Microsoft Security Center. 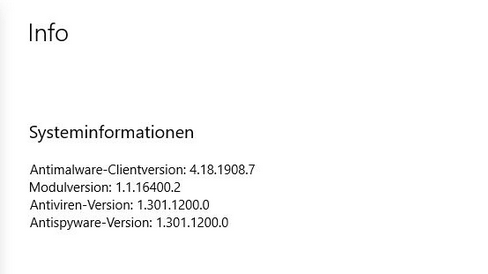 However, the update brings some improvements it has also known issues –

The update replaced the ps1 and xml files located at

After the change, several downloads may get blocked when AppLocker is enabled.

One can only hope that the bug is fixed and SFC / Scannow now goes through without first having to work with the DISM commands, which then restored the older files.

Some devices running Windows 10 will not start if Secure Boot is turned on after getting 4.18.1908.7. Microsoft is working on this problem and plans to find a solution in a future update. To work around this problem in the meantime, follow these steps –

Wait a minute and then do the following –