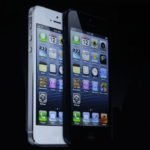 APPLE iPhone 5-REVIEW
The Apple family or rather the iPhone family has yet another member added to it. Following the success of iPhone 4s handsets which has sold over a 20 million units and has grabbed many awards at the Gadget shows, the new member is expected to be a blast. There are various hot debates going around regarding when is it going to release, and this is making the ardent Apple lovers more and more impatient.

Apple puts an estimate of selling about 50 million units of the iPhone 5. Rumors always find a place everywhere and the rumor is that, it can be priced anywhere between 299 to 825 dollars which is quite an amount. But such rumors will be forgotten when the features will be seen. The first inspiration always starts at home and truly getting inspired from the Apple Mac book the iPhone 5 has become much slimmer and stylish. It is expected to house a quad-core processor and RAM may go up to 2 GB.

iPhone Features at a glance

Looking at its features, only wait can be done and it is expected to become a mile stone in the field of mobile technology.