Microsoft comes out with another patch KB4343885 for its users running Windows 10 v1703 (Build 15063.1266) which contains a set of changes and fixes. This specific release also includes significant improvements for Windows 10 Mobile. The update deals with various vulnerability issues such as L1 Terminal Fault (L1TF).

You can manually get the stand-alone package of KB4343885. Or you can leave it on Windows Update to automatically install the patch. This cumulative update does not carry any new features but only focuses on the major problems that users are facing. So, in this article, you will find every detail of KB4343885 for Windows 10 1703 Build 15063.1266 including its source link. 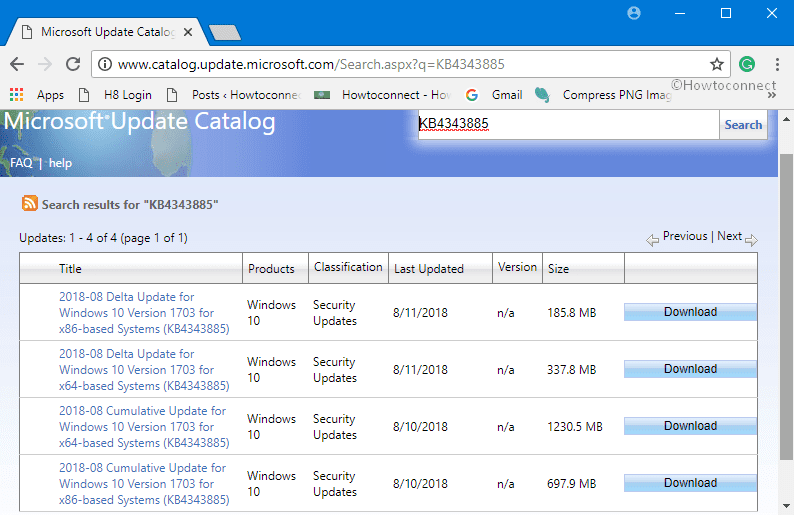 The release of KB4343885 carries significant improvements for the OS and does not introduce any features. Let us explore them in details –

Microsoft rolls out KB4343885 with a view to providing security against the popular vulnerability, called L1 Terminal Fault (L1TF). It basically affects the processors of Intel® Core® and Intel® Xeon®. However, you need to ensure that the earlier OS Versions protections against the vulnerabilities of Meltdown and Variant 2 are turned on by performing a registry hack. The Windows Client guidance KB article outlines about this registry setting in details. Now, for Windows Client OS versions, these registry entries are by default enabled.

The team takes care of the problem that averts Internet Explorer from functioning for specific web pages.

Once you download KB4343885 and install, it will be compatible with the draft edition of the Token Binding protocol v0.16.

The installation of Cumulative Update May 2018 fetches problems with Device Guard. It actually blocks some ieframe.dll class IDs and Microsoft deals with this trouble in this update.

Another change that KB4343885 carries is the assurance of compatibility of preload=”none” tag by Microsoft Edge and Internet Explorer.

This module uses the dot-source operator while exporting functions using wildcard characters, and this is disallowed when the system is under application verification enforcement

The Microsoft team resolves the problem that was developed in the July 2018 .NET Framework update.  The reasons why the applications that depend on COM components were not running perfectly or loading were due to the errors such as “internal failure occurred for unknown reasons”, “access denied“, moreover “class not registered.

The update corrects the way the .NET Framework manages high-density or high-load network connection in order to deal with a vulnerability problem.

The improvement list does not end here as it focuses on the Security updates to Windows Server as well.

Noteworthy is, this package will download and install the new fixes only if you have already installed the previous updates.

The team is currently not aware of any problems with this update.

Windows Update all by itself downloads moreover installs KB4343885 for Windows 10 1703 Build 15063.1266. However, you can also manually grab the stand-alone package. Just navigate to this Microsoft Update Catalog page and click the Download button against the architecture of your system.