Plume is a beautiful app for all those twitter users who want to use it on their Android phone with much easier and new way. It is a free app but the ad free version is paid. It is something that people would really go for when they are tweeting and retweeting, sending message and reply with just a quick launch of the app. It is a much stronger Android client than Carbon although the two has distinct features. It is a must have app for twitter user owing to the powerful features that it offers.

Talking about the Plume interface, it’s a bit colourful, and an added feature is that you get to have a slide bar displaying various options such as Search, Trend, Favourites and List with a few shortcuts to manage your account with no discomfort. This feature is not available in many client. The interface is also very intuitive where you just have to tap or hit the bottom toolbar to get access to different features. 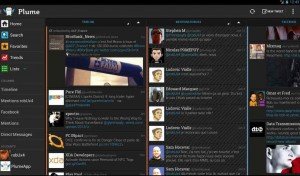 What More Does Plume App have

A lengthy menu of customization options is a unique feature because you can do so many things and try playing with them to move towards an advanced experience. Structurally it is a columns based app like many others where you can edit and delete them if you want. Also you can swipe across different columns at a time to move to a different option. So in this way you can use your twitter, Facebook feed and any other twitter account simultaneously which is a powerful feature and possibly the reason why this app has been appreciated for. In the Setting Menu you can change the theme, font size and the order of the tweets.

Now tweeting is very easy and perhaps the simplest in Plume app. You can keep track character count and it possesses hashtags and different account picker. This is something amazing. Not to mention how easier it is to attach photos, squeezing URLs and making longer tweets with an integrated TMI.me feature. It also enables users to share photos with other services like TwitPic and Lockerz. You can also select GPS option from the Settings menu to display your location. Coming to the trending terms of Twitter, this app does so much more than just tweeting and reading. It offers global as well as local trends for few cities including San Francisco, Los Angeles and Las Vegas among others.

Using Plume would definitely provide you a different experience with its highly customized nature. Although there are certain shortcomings in this Plume app which is quite often the case with any other app so if you still haven’t reached for the perfect one this app is highly recommendable.