3D printing support is a nice application of Windows 8 allowing you to print 2D content in fantastic 3D format. It means that windows lets you 3D print an item directly from third-party applications by clicking print.  Windows 8.1 allows its users to find a native 3D environment implemented in the OS. It has included 3D printing for showing how much it is ready for future application. The interface of this app is really cool and beautiful. Microsoft has published update related to 3D printing feature in Windows 8.1

Windows 8 has extended the IXpsOMPackageWriter and IXpsDocumentPackage -Target interfaces so that 3D printing is enabled. A 3D model is a collection of one or more physical objects in a markup format. Printing in 3D is pretty much similar to printing on paper except that you’d be using a special 3D printer to print out any designs you may feed it. A screenshot of the new kind of 3D printers is shown below: 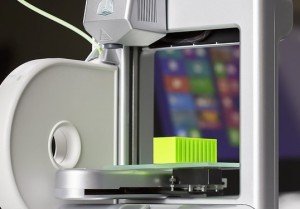 According to Microsoft, there are many pre-existing data formats which are related to 3D graphics and 3D models in existence these days. However, the ultimate goal for which they are trying to achieve is still far. They have also explained one of the main causes by describing a missing component STL which is mainly responsible for the color and the material support. They have decided to develop a new 3D manufacturing based on partner feedback, and requests i.e. 3MF is actually 3D Manufacturing Format about which Microsoft is planning to create. It is an XML based data format that has all the necessary things related to the manufacturing part as well as 3rd party extensibility for custom data.

This new format is believed to provide a solid foundation to 3D printing support in Windows 8.1. It is a kind of a special ingredient to windows in terms of biological sense which helps windows to print things in 3D Format.

How the printing sequence works here

If seen as an overview, it works almost the same way as it prints a 2D files. There are slight changes. However, I am going here to describe a full procedure in brief.

At first all the list of available 3D printers is enumerated. Users select the printer which he is going to use and then he presses the print options. Actually here 3D Models are converted into 3MF format before printing. The data present in this format is stored in an OpenXPS document package. When this data is sent to a 3D printer, the driver extracts the 3MF package and transformed it into a new format which is known by the printer. This data is then printed.

The process of printing in the windows is done by using the device charm on the Charms bar. Those who are going to print anything could easily select the exact 3D printer which they are going to use. They could specify their preferences on the 3D printing by themselves. Not only this build-up 3D printing support into your operating system but it has also provided another feature SDK for developers which includes the documentation and sample code for 3D printing drivers and apps.

Microsoft is trying to bring a lot of new facilities as well as advancements in windows 8. You can look for more of the details by visiting its official website.