JumpListsView is a Free App of Windows 7 and Windows 8. This App is used to get the various information which is stored in the ‘Jump Lists’ feature of Windows 7 and Windows 8. The information obtained by this App is displayed in the form of a table consisting of the various items arranged properly with their source path, Date of creation and modification, and many others. You can also save the information obtained here in the form of a report and that could be re-used at a later time.

This App allows users to see whatever is stored in Jump Lists i.e. Files and Folders. Once you get access to these lists, you can use it for further aspects in Future.  You can also export the Jump Lists records to csv/tab-delimited/xml/html file. The interface of this App is Kept simple. It seems like an Excel file with your previous works arranged in a very proper and suitable way. A screenshot of this App is shown below: 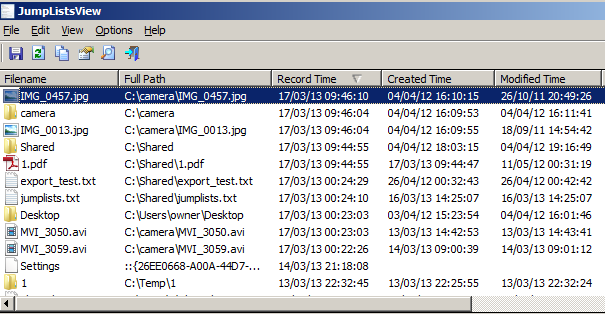 Note Opening two records with the same Application ID, then both files were supposed to be opened by the same application.

How to translate JumpListsView to other languages

Translating JumpListsView to other languages is very simple. You just have to follow the below instructions:

JumpListsView is a very important App for those who want to take care of what is going on or happening on their computer or laptop in their absence. You can have an eye on your kids using this App as this app tell you the exact time and the full path of any file. Again, this is also an important app for those people who give their computers/laptop usually to their friends. Thus here too, you could know what is exactly going on your windows machine. This is really a very wonderful and amazing app as far as my ideas are concerned.

How to get this App

If you are willing to have this software installed in your windows machine, visit the link provided below: