In the past two days, you have seen pretty exciting happenings for Microsoft Office and Windows 10. A Number of tech websites posted the images of the next major version of Microsoft Office, i.e. Office 16. This leaked picture alludes that Office 16 will be shown with a dark theme and clearly suggest that Microsoft is now taking user feedback.

This is an opportunity for Office devotees and they can Get Office 16 Pre-Release Beta Short of Release and send their opinion to Microsoft.

How to Get Office 16 Pre-Release Beta Short of Release

So, Microsoft is looking for releasing pre-release version of Office 16 in October to overtake the problems which you were facing earlier. This would help you to participate in Office 16 Pre-release program and give your hands on the next version of Office as early as possible so that you can get better software. If you want to get Microsoft Office 16 earlier you need to fill up a form accurately and submit it.

If you are love Microsoft Office and like to help the Office pre-release programs team to test the next version of Office then you need to register for the program and submit. After submission of the form, you will get notified by Microsoft team on your Windows live account. 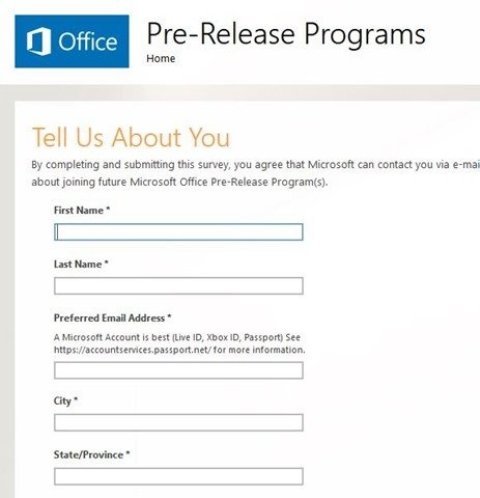 You require the head over to the link mentioned at the end of this article and then complete the process by entering the details as the given like as  your name, email address, and age to join this program. Then Microsoft will contact you via email with additional details if it required.

Note : It should note that Microsoft may not contact or invite all the people who have completed the process to join the pre-release program.