Now Microsoft has rolled out Windows 10 Build 18362.30 to Fast and slow rings to fix install issues. You might have encountered problems when receiving 18362. KB4497464 will lift  Build 18356.21 to 18362.30. After getting multiple adverse feedbacks about errors during installation they offered a fresh update.

On Build 18362 (19H1) in fast ring, several users submitted feedback about getting install issue with error code 0x80242016. The same scenario happened in the slow level. Microsoft discovered that Build 18356.16 (KB4494123) was blocking the update to Build 18362 from accomplishing easily. As a result, they withdrew this for some time for checking bugs. Afterall, 2 days ago, they pushed KB4496796 in slow ring to fix update issues but after an investigation hey found that a fresh build for both rings was required. Just rush to check Windows update grab it. 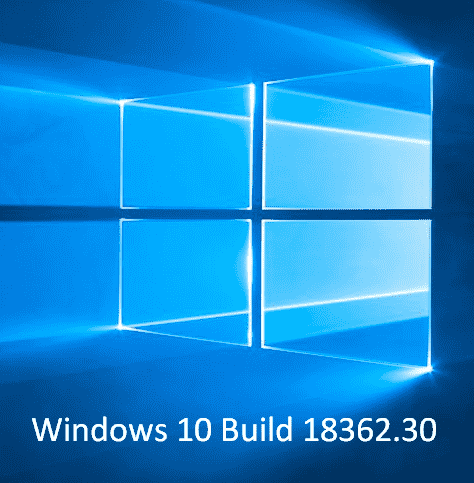 Here are the fixes and improvements that the build includes –

Windows 10 Build 18362.30 comes with a resolution for .Net Framework or other optional feature- on-demand (FODs) problem. Users were unable to disable and enable them after getting recent Cumulative patch.

After getting recent cumulative update a PC may encounter an unbootable state specifically while installing an optional feature-on-demand (FOD). This issue no longer occurs after this Build.

Press Win+I and let Windows Settings appear on the screen.

Select Update & Security once get at the UI.

Click Windows update from the left hand side pane and jump to the corresponding right.

Select Check for update and wait for the build to download.

When finished, you will be asked to Restart your computer, so follow and sit back until the installation is completed.