Windows 10 Insider Preview Build 17672 (Redstone 5) hits to Windows Insiders in the Fast ring level including those who opted in to Skip Ahead. Microsoft has also detailed the 3 days build conference on this occasion. The current build includes Windows Security enhancements, general changes, and fixes for PC. 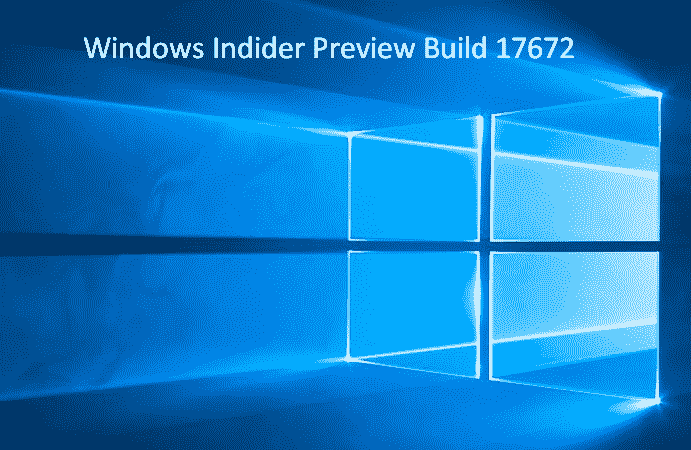 Windows Security Center service, after Build 17672, requisites antivirus products to run as a protected process to register. The Products that have got this feature will not appear in the Windows Security UI, and Windows Defender Antivirus. They will be continually enabled side-by-side with these products.

For testing, disable this new enhancement in Windows Insider builds by creating the following registry key and rebooting the device.  This key will no more as Microsoft gets closer to release.

They rectified an issue with structuredquery.dll resulting in some users experiencing a cyclical explorer.exe crash.

Windows Insider team fixed a bug ending up with the two-finger gesture to dismiss all notifications not working in the Action Center.

They solved a problem where Korean IME sometimes entering duplicate characters when typing into text fields in Microsoft Edge.

You are able to refresh  Books pane in Microsoft Edge web browser via a pull gesture after receiving Windows 10 Insider Build 17672.

When you pin book to Start using Microsoft Edge you will now view a live tile that cycles between the book cover and your prevailing ending progress.

When you print PDF from Microsoft Edge, you’ll find a new option to choose the scale of your print out (Actual size or Fit to page).

They updated Timeline in order to perceive the number of available tabs to restore associated with a particular Sets activity, you can now cycle through them.

Microsoft experts settled a problem that could result in apps sometimes not fully maximizing to the top of the screen.

They removed a mess ending up with some devices not being able to wake from sleep.

When you hover over the leaf icon in Task Manager Status column, you will now notice a tooltip indicating its state.

For detail info, see here – What Are Suspended Status Icons in Task Manager on Windows 10?

After Build 17639, including showing Bluetooth Device battery level in Settings for supported devices, you will now notice a notification when one of those devices is low on battery.

When you’ve enabled WSL, you’ll now get an option to Open Linux Shell here when you press Shift and make a right-click on the whitespace of a File Explorer folder.

After performing the Windows Mixed Reality First Run experience, OOBE gets black. Motion Controllers are also not identified in exclusive apps. If you require Mixed Reality to be working it is kindly not take this build until these issues are fixed.

The Windows 10 Insider team is knowing the problem that causes Narrator to read additional text when pressing Alt + Tab.

When you configure Mixed Reality headset on this build, the headset will be black until you plug and reconnect to the PC.

Windows 10 Insider Preview Build 17672 advances the support for dark mode in File Explorer and the Common File Dialog. You’ll experience improvements in this build, but they still have some work to do.

Insiders users practicing Remote Desktop, project their screen or have multiple monitors may encounter explorer.exe hangs on this build. This issue can also lead to Microsoft Edge hangs.

Old problem – the top of certain Win32 desktop application windows night look somewhat beneath the tab bar when maximized. To temporarily settle the issue restore and re-maximize the window.

While closing one tab may sometimes minimize the whole sets.

View Side by Side moreover Tiling and cascading windows in Word m, will not function for inactive tabs.

When you Open an Office document while the same application has an alike “document” running then it may switch to the later active. This will also happen when closing a sheet in Excel.

This is all about Windows 10 Insider Preview Build 17672 problems, features and fixes.