You should have received Windows 10 Insider Preview Build 18282 automatically: if not then travel Settings => Update & Security => Windows update and hit ‘Check for updates’ right now. The features of this update will be included in the next major release Windows 10 1903. 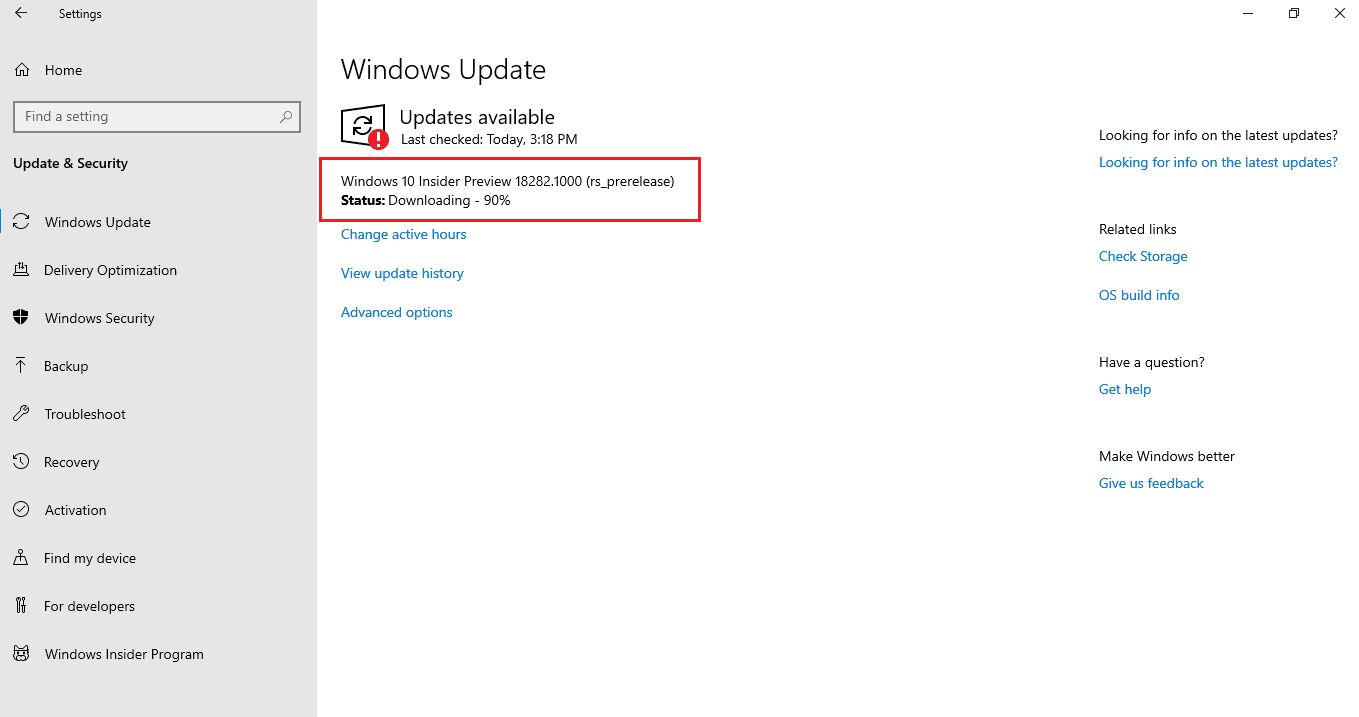 The current option to choose between the dark and light theme in Windows 10 is not suitable for multiple users. The feedbacks reveal a continuous demand for a true separation between these two options. So, in Windows 10 Insider Preview Build 18282, by navigating to Settings => Personalization => Colors, the system color will become lighter when you choose Light. Although, the Taskbar and various other settings remain dark. Now after installing this build, if you select Light by going to Settings -> Personalization -> Colors, all the User Interface of your system will become light. It includes the Action Center, Start Menu, Taskbar, touch keyboard, and other. 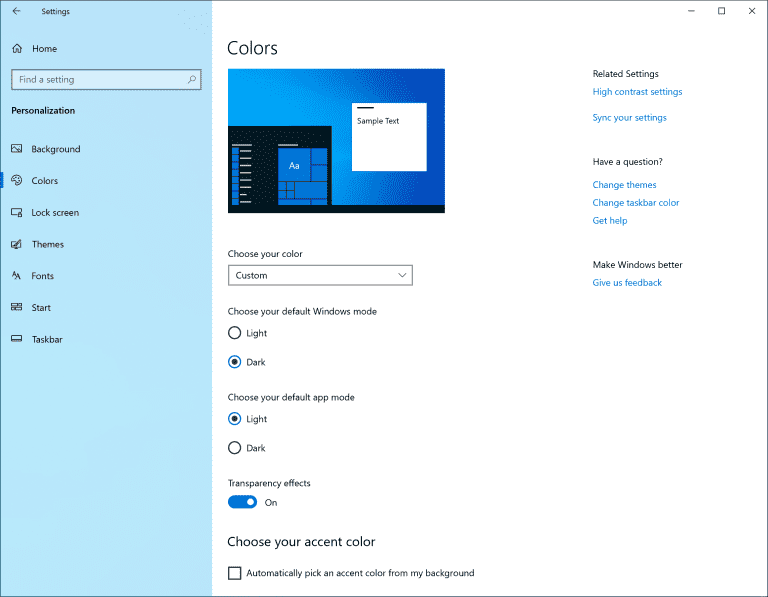 When you install Windows 10 Insider Preview Build 18282, the system colors won’t change itself to the lighter tone. It is simply because Microsoft wants everything to look same as it was before the update. The display depends upon your setting. If prior to the update, your setting was light, the changes mentioned here can be seen after the update. 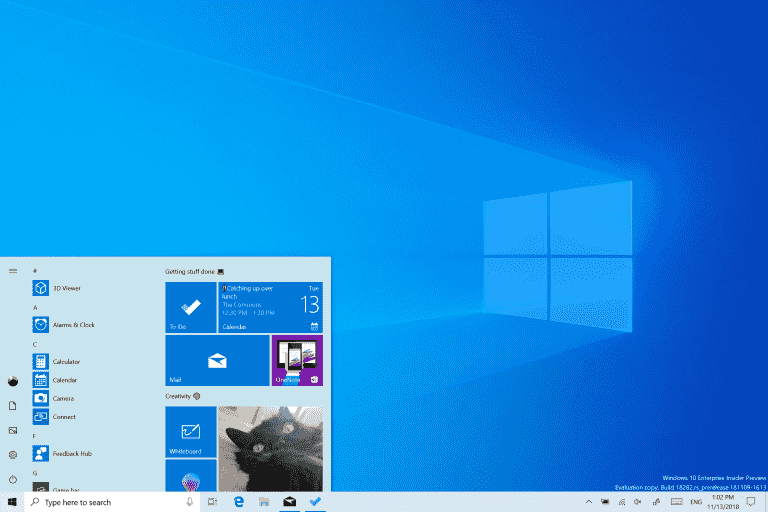 If you are thinking it’s all then wait because with the Light theme Microsoft is also providing you with a new wallpaper.

After evaluating the feedback about the snipping experience of users, there were two major requests:

After the addition of delay snip via app version 10.1807 and 10.1809, window snip will be available for insiders also. You can start the snip through your desired entry point (“Win+Shift+S”, Print Screen (if it is enabled), directly from Snip & Sketch, and others), and choose the window snip option from the top, and snip. This selection remains the same when you begin a snip next time. 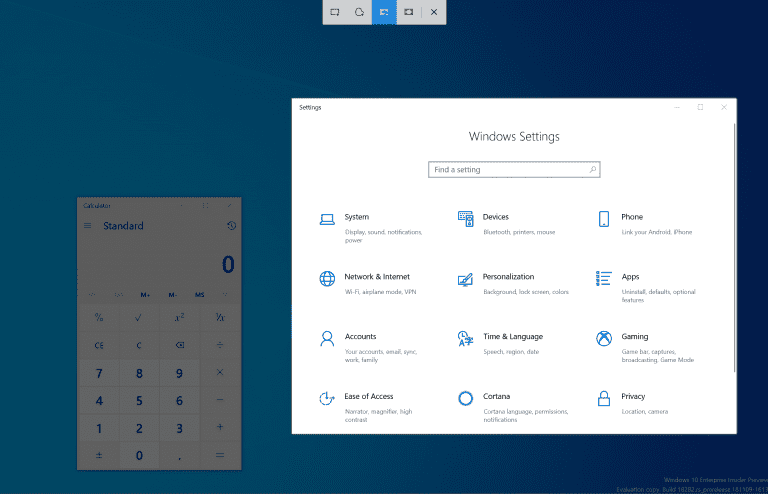 Recently, only 50% of the insiders can experience window snipping but very soon this feature will be available for all.

The first improvement you will notice is that light theme is now available in the modern print dialog.

The second improvement is that for a better clarity, Microsoft has updated different printing options and they now include icons. They will help you to quickly and easily find out the one you are searching for.

You will also see that many drop-down settings now have lines of description. All this can be seen at the print dialog. 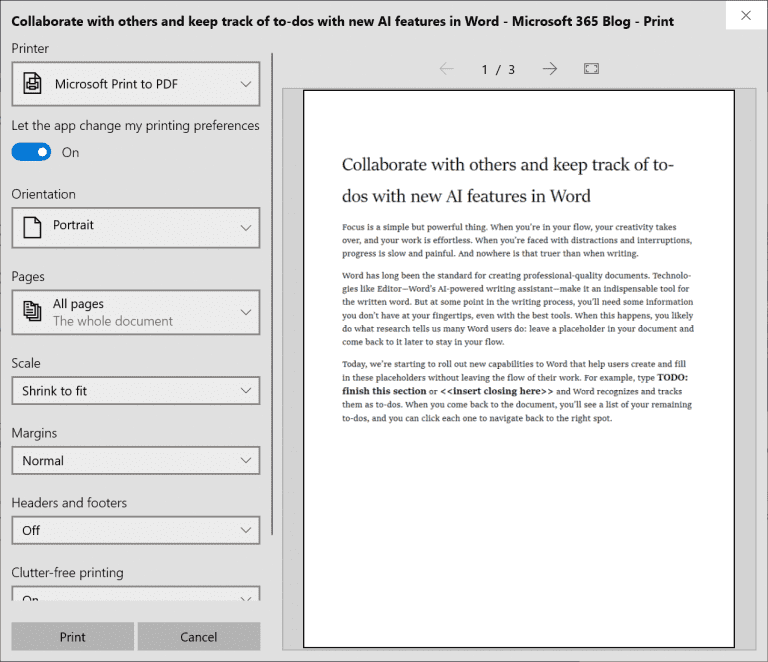 Finally, if the name of your printer is long, it will wrap instead of being cut off.

You will find Pause update in Windows update page instead of Advanced options. The change of location of this setting will help to find by navigating only to Settings => Update and Security => Windows Update’ page. As earlier, Pause will let some updates, like Windows Defender definition update to install. Moreover, this option will allow choosing either a pre-defined number of days or until the specific day (day selector is available on the Advanced options page). 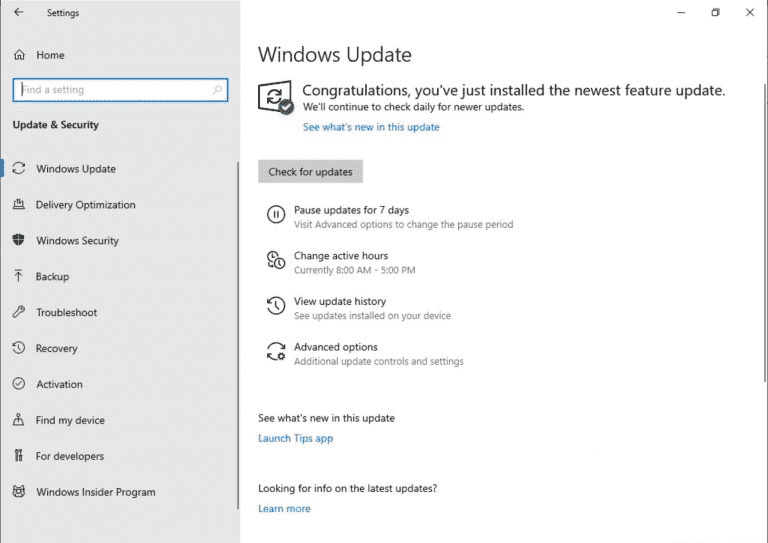 When you will set new active hours Windows know when to avoid restarting your device. Now, Windows can automatically adjust the setting for you depending on your device activity. Just access ‘Settings => Update and Security => Windows Update => Change active hours’ page to turn this setting on and aware that reboots will not disrupt your productive time. 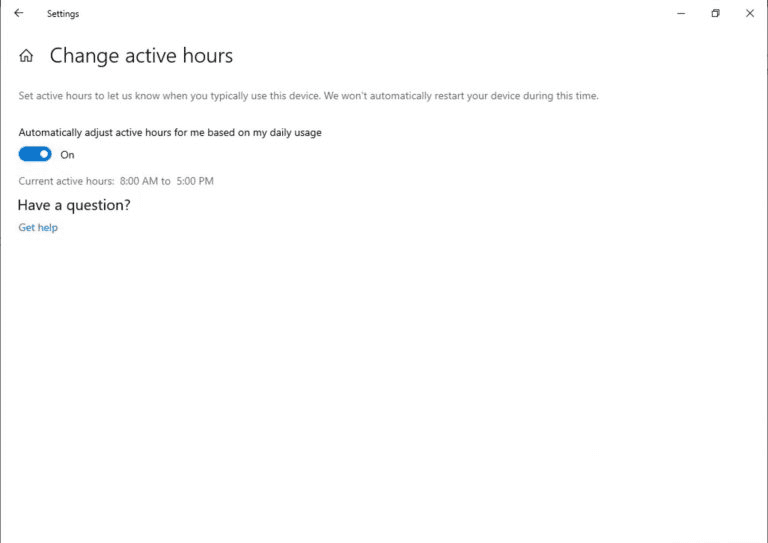 Windows insider has modified the display brightness behavior for 19H1. So this will not change when transitioning from a battery charger to battery power. Windows will remember the preferred brightness based on adjustments by a user whether he is on battery or connected to a charger. This different behavior provides more consistent and battery friendly experience. The change does not have any impact on battery saver mode settings. When a user has lowered the screen brightness while staying in battery saver mode, their display will remain dim when the battery is under the threshold chosen.

Microsoft has changed the amount of information you hear while interacting in Windows. You will notice these improvements filter in throughout future builds. You will find a new Narrator Setting entitled  – Hear advanced information about controls when navigating – in the present insider build. When this feature is disabled you will not hear the advanced information earlier spoken on controls. Furthermore, Tooltips will not be read by default. Use the Narrator command (“Narrator + 0”) to read a tooltip on a given item. Additionally, you will see that some control information will now start to speak in a more consistent way. Narrator Settings includes Checkboxes and radio buttons to manage this new behavior.

Narrator text reading commands (“previous/next for character/word/line/sentence/paragraph/page”) can now be used to scan a full window from uppermost part to bottom. It will not possible to – get the not on explorable text – error and only when you reach the boundary of the window will you receive no next or previous text. In addition, the views options are onward consistent whether you are under text content or not. For example, you can now click views option to search for a link anywhere within the active window.

Read by sentence commands are onwards available through a braille display by using dots 2-3-4 or 2-3-4-7 in command input mode. However, the team is still working on fixing a couple issues.

In the Windows insider Preview build 18277, Narrator received support to read characters phonetically. It means reading out a Alfa, b Bravo, c Charlie while jumping on abc by character.

At that time, multiple insiders demanded using feedback that they didn’t want to hear the phonetic information announced automatically. Rather this should be an on-demand feature that should be available when called upon. So the current build will not announce the phonetic information itself. As you navigate using characters, this information will vanish. When you require the phonetic information to disambiguate characters, you are free to create a command to hear. Press the keyboard shortcut Narrator key + Comma twice instantly. As an instance, on Standard Keyboard layout having the default Narrator key setting of Caps Lock or Insert, you would issue the command of Caps Lock+Comma (or Insert+Comma). But remember that you must press the Comma key two times quickly while depressing the Caps Lock (or Insert) key.

When you want to listen to phonetics for a string of characters in a sustained fashion, you can get read out it continuously. But you will have to move backward or forward via a range of characters with either Narrator key+Period or Narrator key+M. Although using this mode, you will be able to hear just phonetics and not the characters (for example, Alfa Bravo Charlie). To intercept the phonetics, press any other command (for instance., Left arrow, Right Arrow, Tab, etc.) or re-issue the Read Current Character command (Narrator key+Comma). Onwards you will hear reading just the characters, without phonetic information reading.

OneDrive flyout will onward be dark if you have enabled dark mode in Settings. 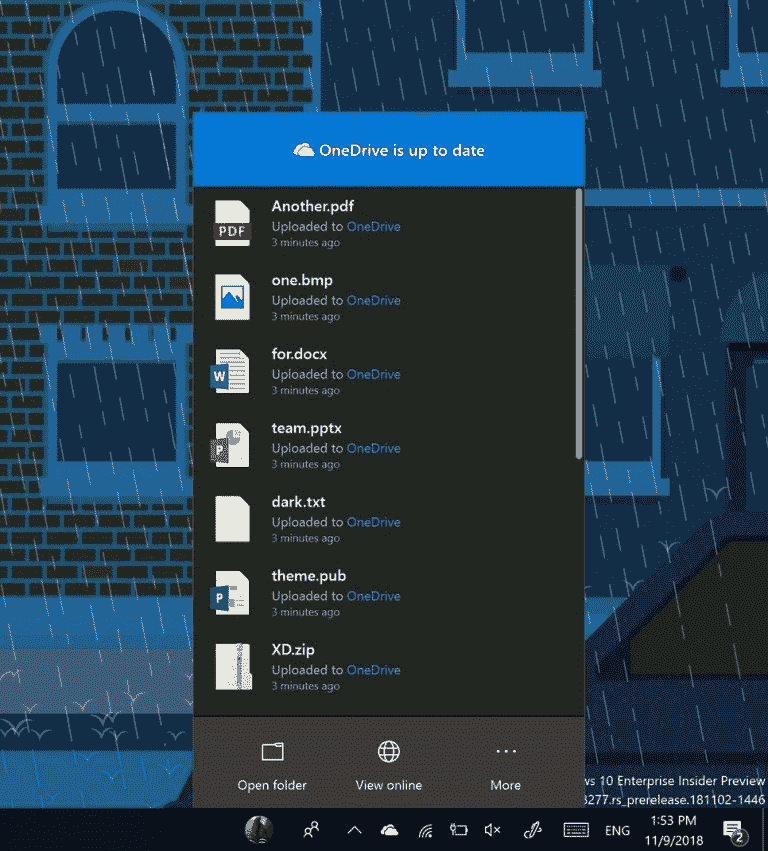 When you open PDF in Microsoft Edge it may not display in small size instead of using the entire space.

In the Sticky notes dark mode, hyperlink colors need retouching specifically when the Insights are turned on.

The Dynamic lock settings are missing from sign-in page because of a merge conflict.

Settings app crashes after clicking on – View storage usage on other drives – under System => Storage.

Remote Desktop will only display a black screen for certain users.

When switching Fast ring to  Slow you couldn’t get optional content, for example, enabling developer mode. You will need to continue with the Fast ring instead to enable, add or install the optional content. The reason behind this issue is this will only install on builds pre-approved for particular rings.