July Patch Tuesday update KB4507453 breaks Print Spooler service on Windows 10 1903 as some clients have reported. Microsoft has put this cumulative update on hold until they resolve the issue.

After installing KB4507453 printing is not working problem started on the version. Troubleshooting further, Microsoft experienced that Print Spooler -service was not automatically starting as it should. When they tried to start the service with local admin accounts – 0x80070005 Access Denied error message appeared. While Using Domain Admin account there was same result. SFC /Scannow command couldn’t succeed to fix the issue.  Moreover, deleting c:\windows\system32\spool\PRINTERS\*.*  didn’t work. Access denied error occurred after each of the resolution methods when Starting service. 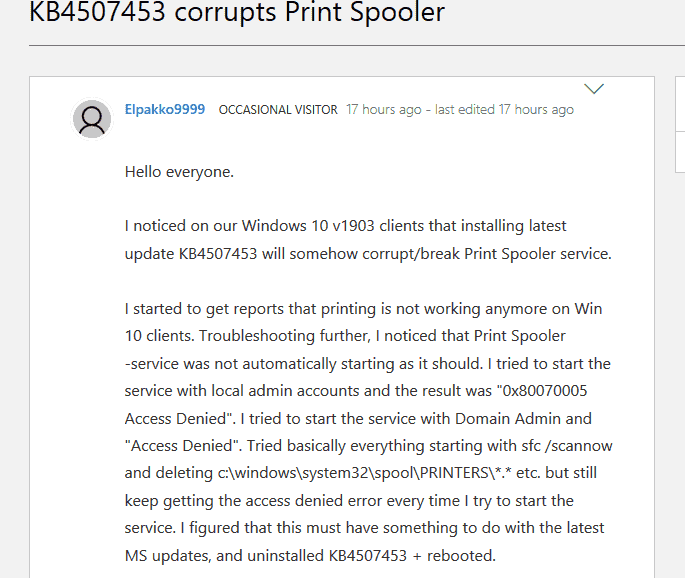 Corrupted Print Spooler Service again worked normally only after uninstalling KB4507453 and rebooting. After the uninstallation the service autostarted. So it was confirmed that the cumulative update was the main culprit behind the error.

Corrupted Print Spooler Service only occurs on Windows 10 1903 and other versions like 1607, 1703, 1709 are working fine after installing the cumulative update.