Many users run numerous programs at a time and they all drain power even if few programs run in the background. As per Microsoft, the first experiment with Power Throttling saved around 11% in power consumption of CPU. Well, the actual percentage may differ depending upon the programs that are running and throttled. The below screenshot clearly displays which processes are Power throttled.

Note – For the time being, Power Throttling is a temporary name and Microsoft may change it in the near future. Moreover, this power feature is only available with Intel’s 6th Generation Core processors, but in the course of development, Microsoft will expand the support.

Step 1 – Press Win&X keys and select Settings from the power user menu. Instead, you can also launch the application by pressing Win&I keys altogether.

Step 2 – Select System when various categories come into view on the homepage of the application.

Step 3 – Click Battery on the left sidebar, shift to the right pane and click Battery usage by app. 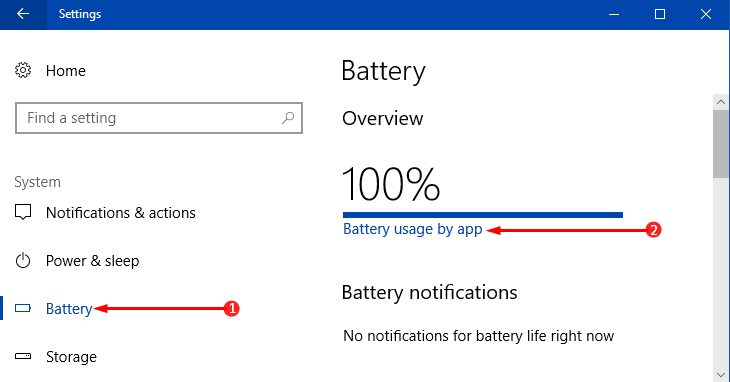 Turn ON  Power Throttling for App

Step 4 – On the Battery usage by app page, select an app, and toggle ON Managed by Windows option.

Step 5 – Moving ahead, checkmark the box against the option Reduce work app does when in background.

Turn OFF Power Throttling for App

Step 6 – After selecting an app, toggle OFF Managed by Windows by pulling its slider towards left. Next, deselect the option Reduce work app does when in background. 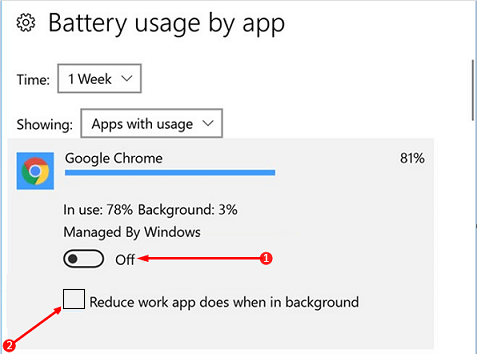 For reference, you can read Change Percentage Level of Low Battery Warning on Windows 10.

With “Power Throttling”, when background work is running, Windows places the CPU in its most energy efficient operating modes – work gets done, but the minimal possible battery is spent on that work.

Completing the above steps will make you able to Turn On or Off Power Throttling for App in Windows 10 pretty much easily. However, Power Throttling is still under development and soon Microsoft will come up with more changes to it. If you have more on this new power saving technology, write in the comments form.